Last updated May 19, 2019 Documents with Both U.S. and Non-U.S. Revenue Stamps Affixed

One of the most interesting and elusive types of revenue documents to try and find are documents with both U.S. and non-U.S. revenue stamps affixed. They are much more difficult to find than one would expect. Cross-border transactions, transactions with multiple steps or stages each taking place in different countries... Examples from the Civil War and immediate post-Civil War era (1862-1870s) are much more scarce than those from the Spanish-American War Tax era (1898-1901). 20th century examples are not exactly abundant either.

If you have any examples of U.S. and non-U.S. revenue stamps used on the same document for trade or sale, please contact me.

Click on any thumbnail below to pop up a window with more information. 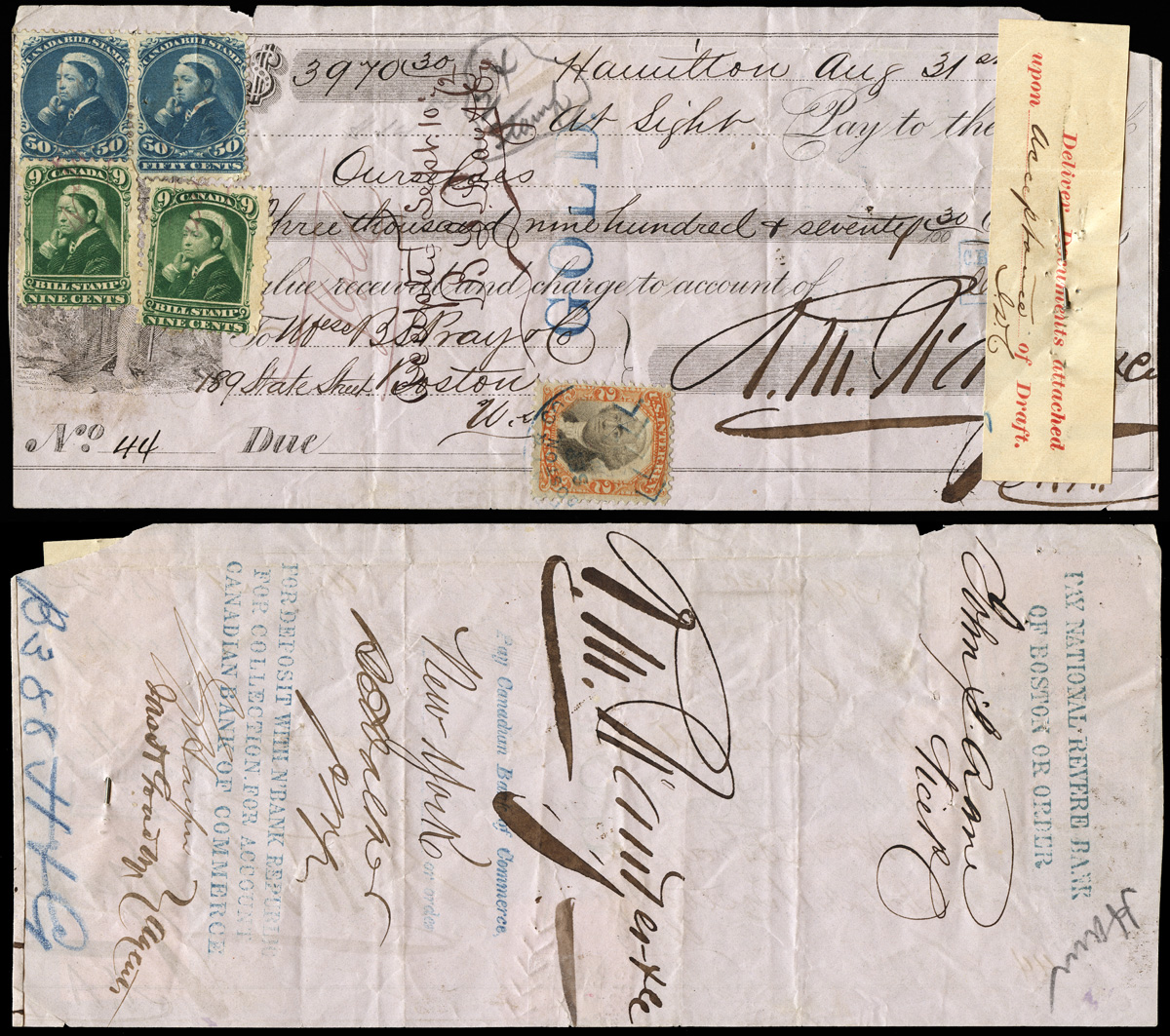 Sight draft from Hamilton, Ontario, Canada to Boston, Mass., with both Canadian and U.S. revenue stamps. 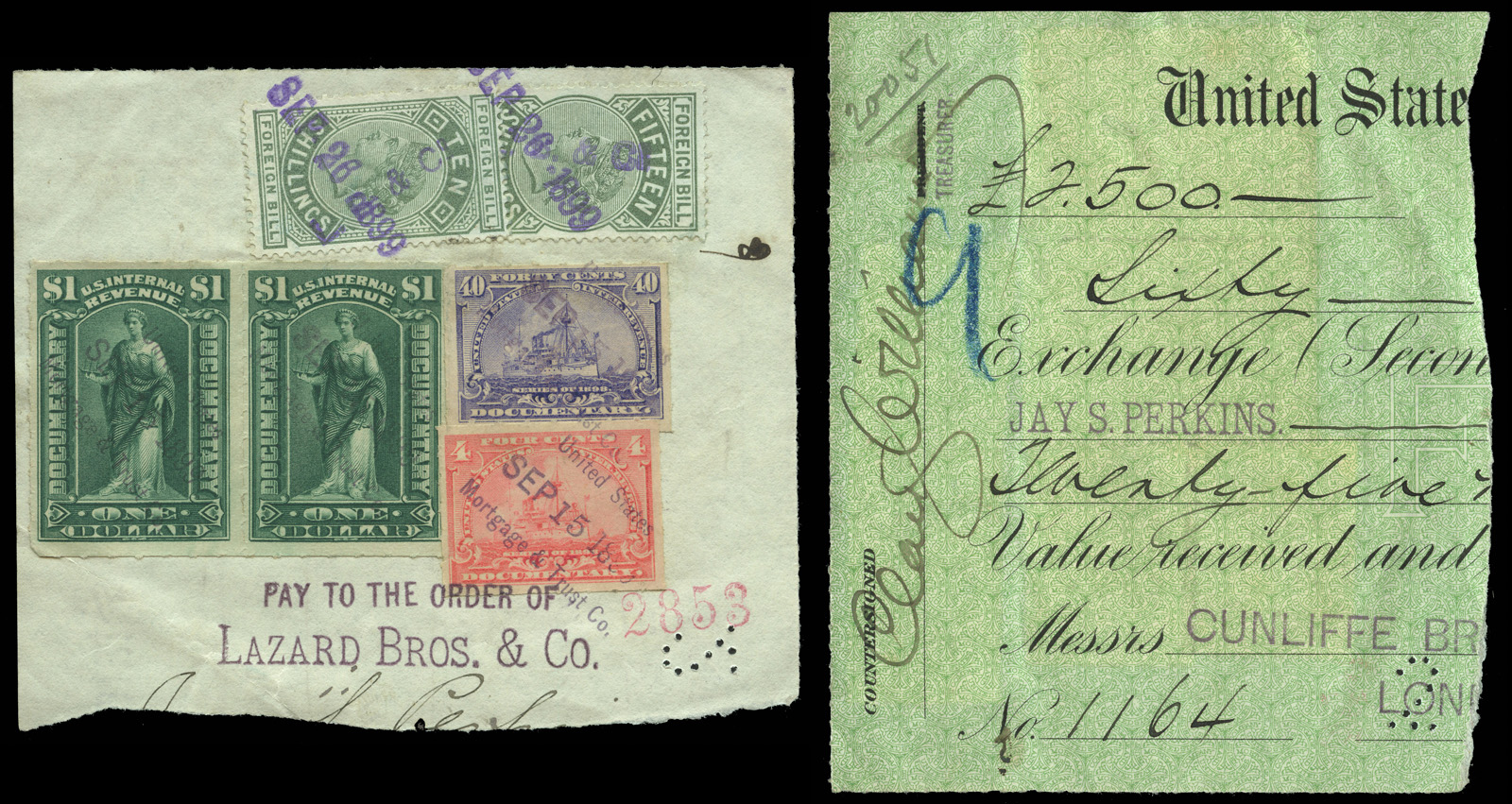 Fragment of a Second of Exchange document from the United States Mortgage & Trust Co., sent to England, with 4-cent and 40-cent battleship documentaries and a horizontal pair of $1 commerce, along with two English 10-shilling Foreign Bill revenue stamps.

Bill of foreign exchange originating in England, with imprinted British revenue stamp, with vertical pair of 4-cent Battleship revenues upon redemption in the United States. 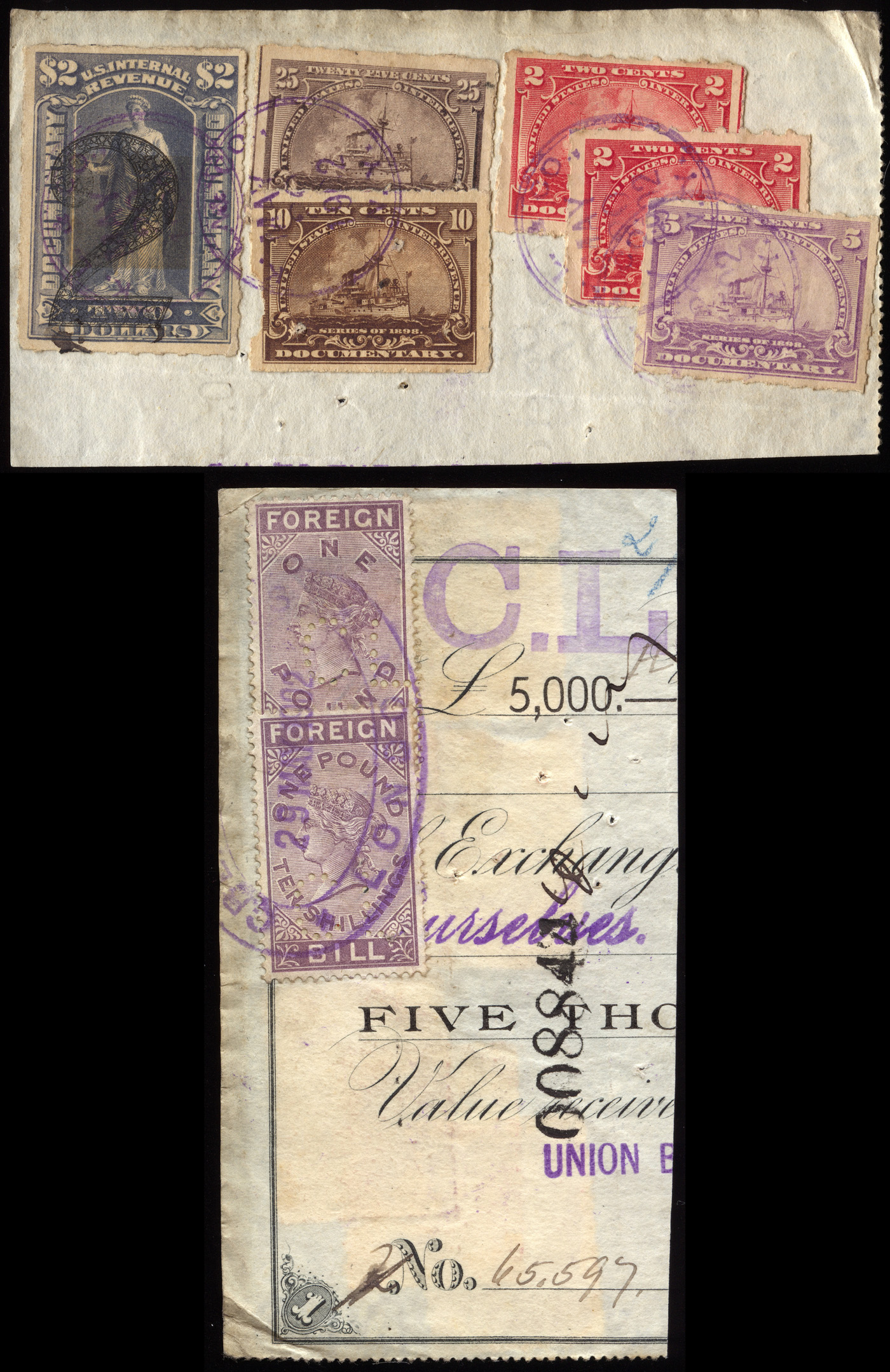 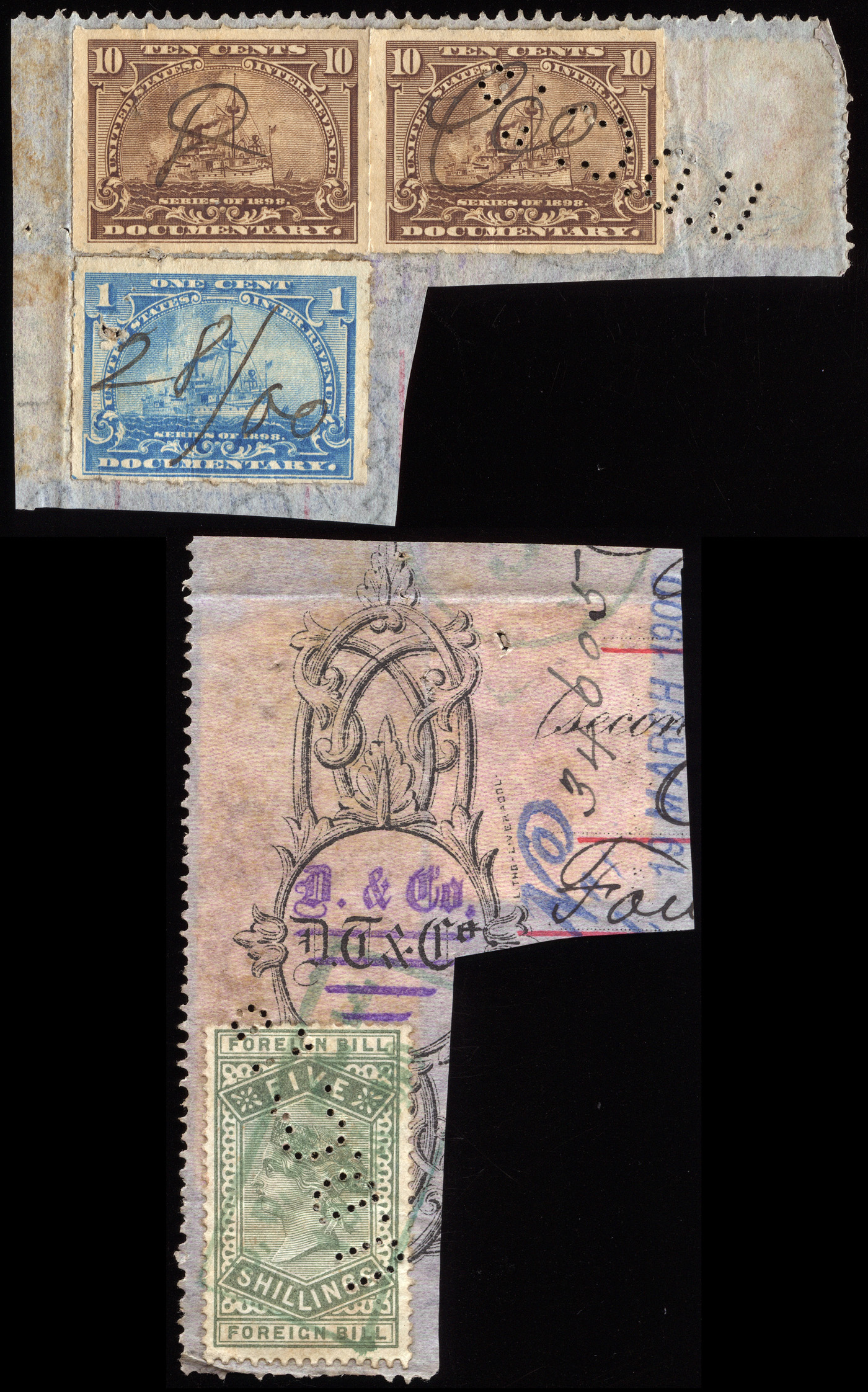 Pair of R168, along with a single R163, on document fragment. On the reverse is a single British 5-shilling Foreign Bill revenue stamp. 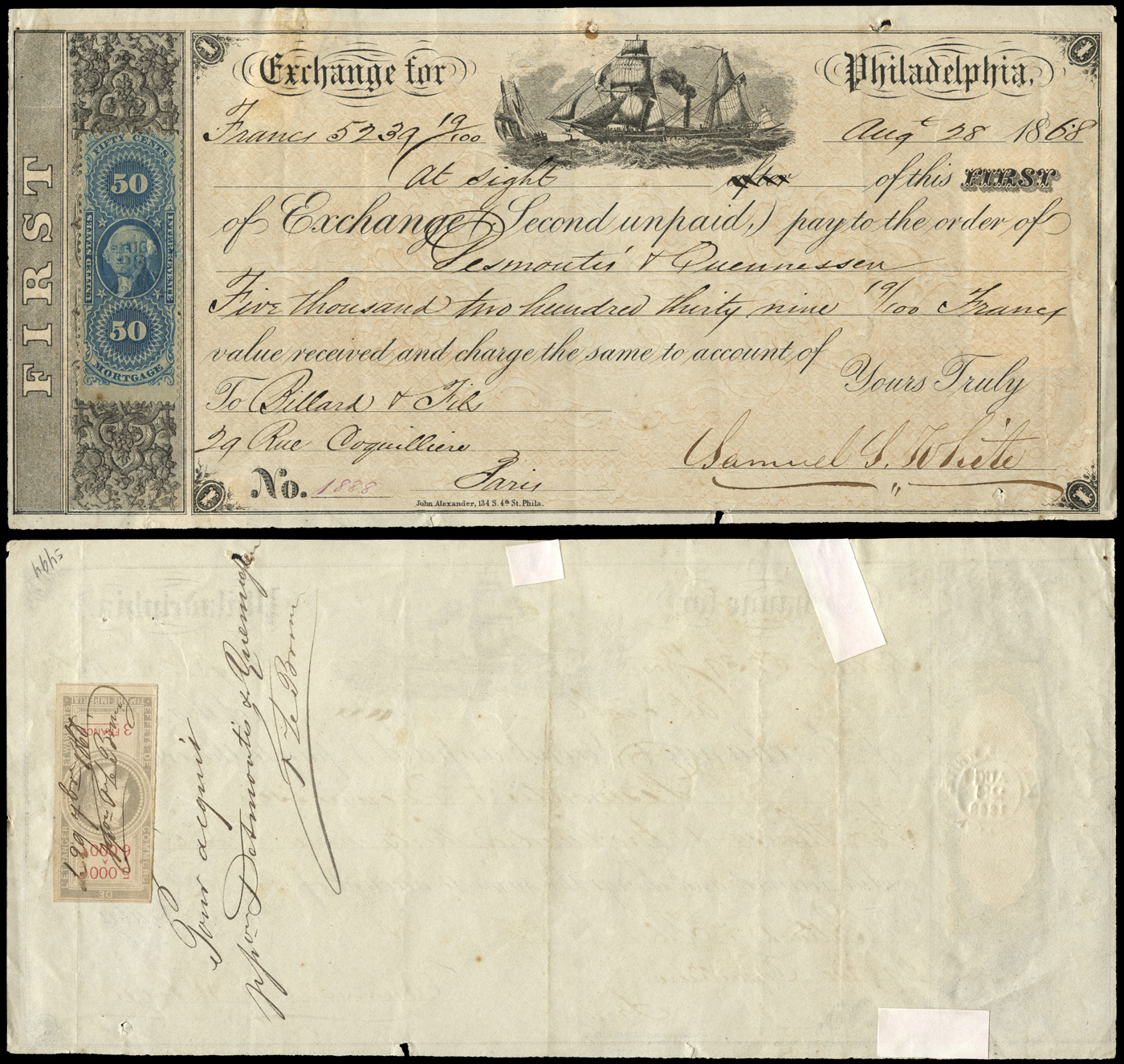 Sight draft with a French revenue stamp applied on the reverse. 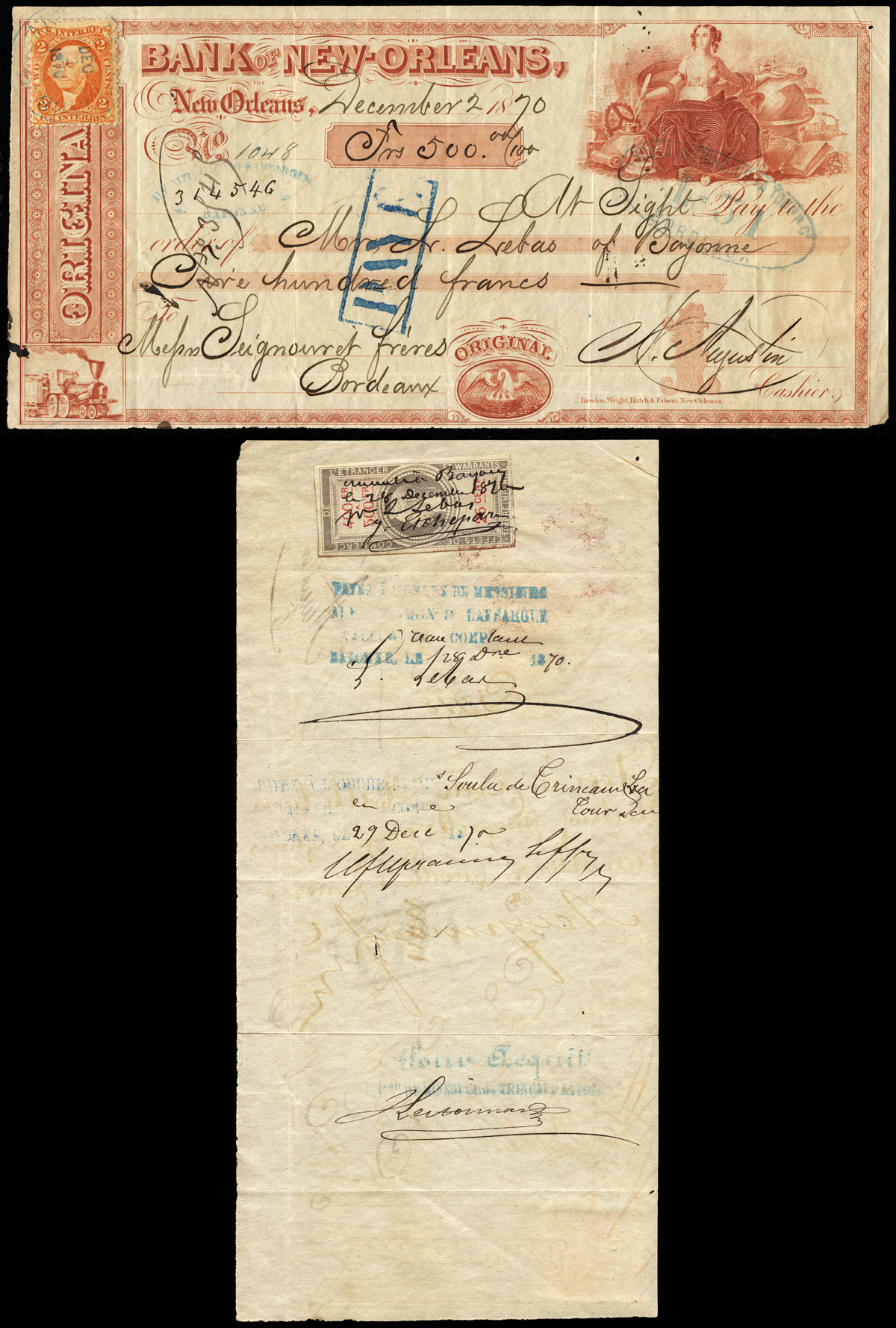 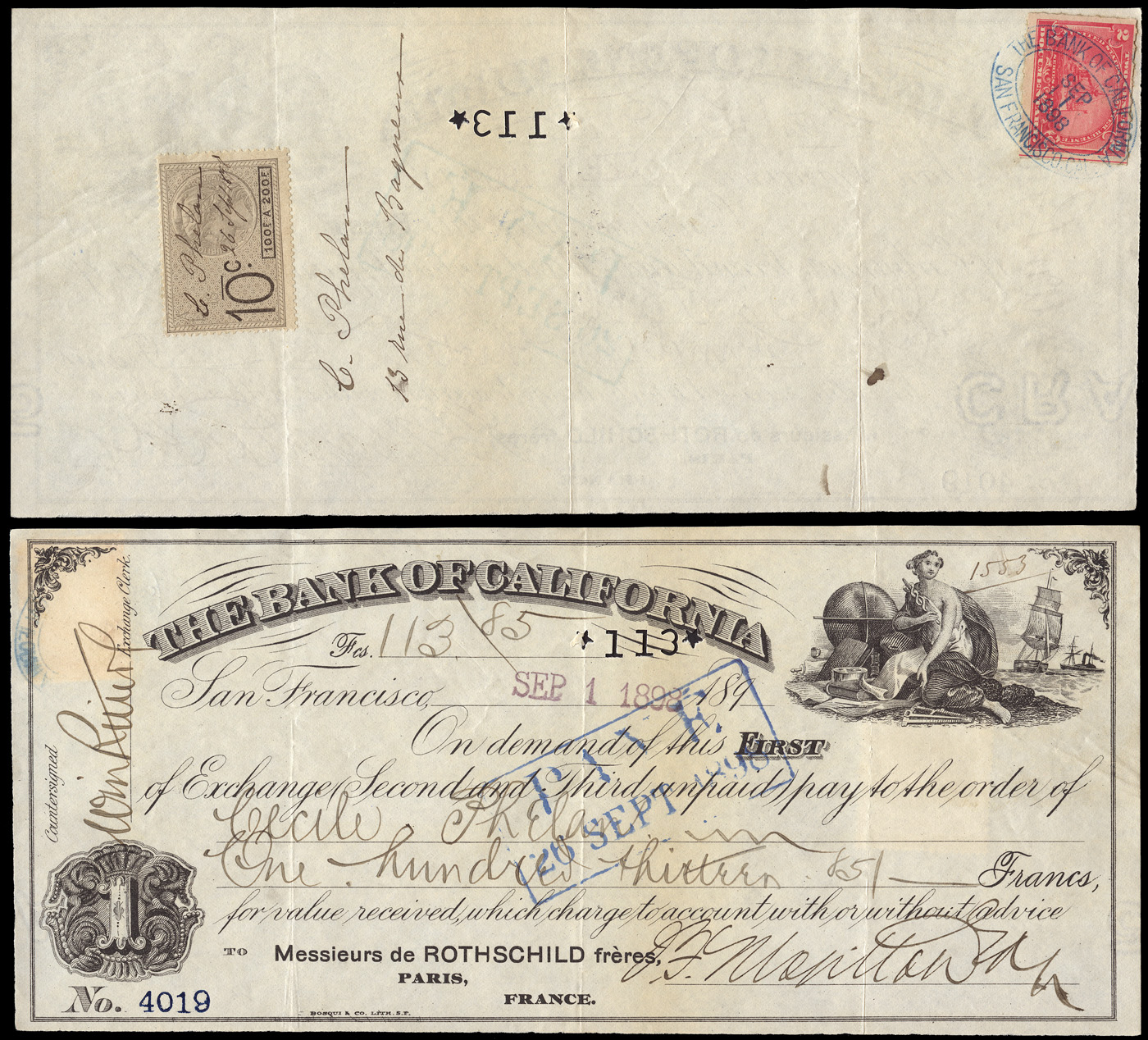 Bank of California foreign exchange document sent to France. Same bank and destination as the document below, executed within the same week. 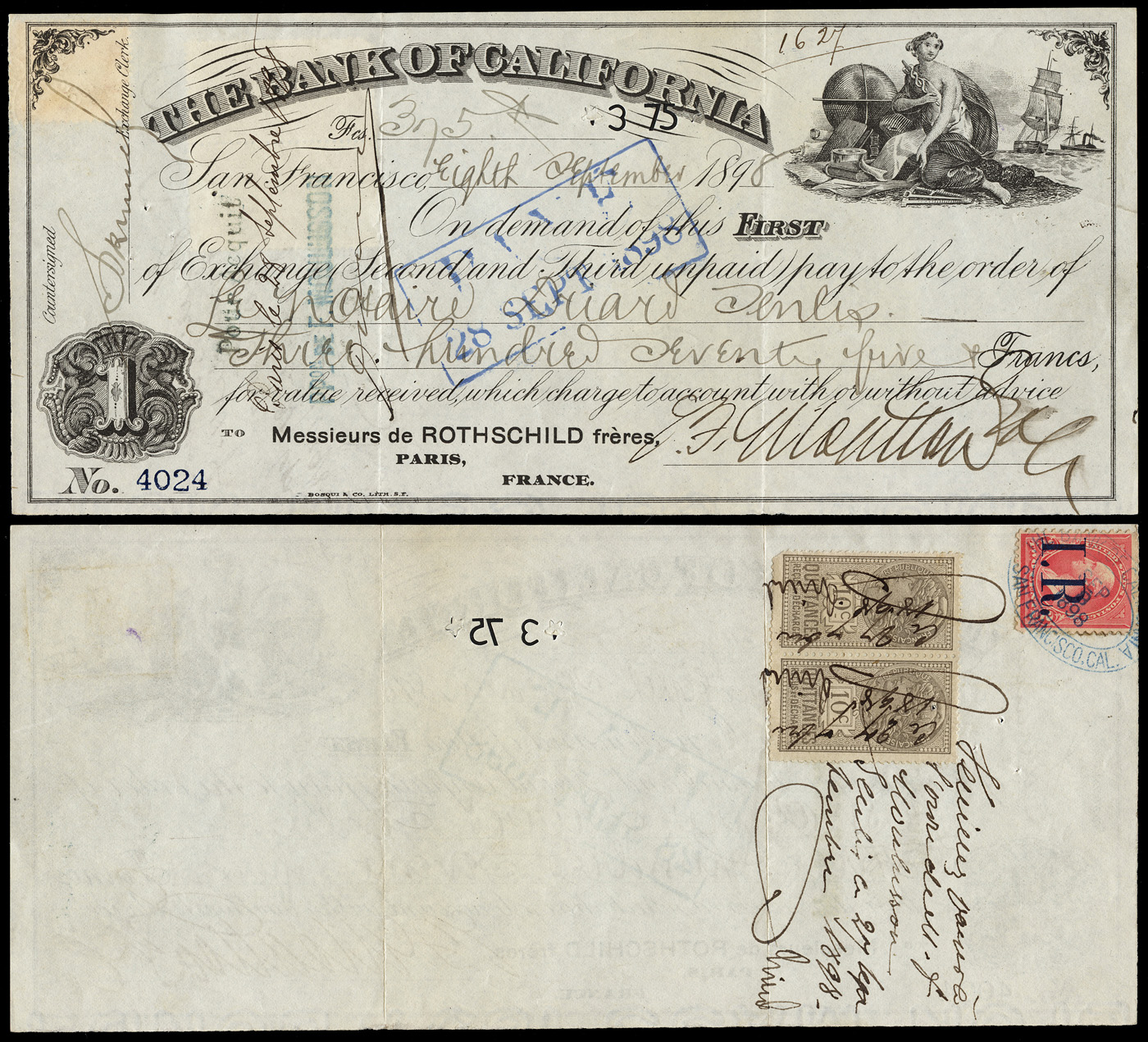 Bank of California foreign exchange document sent to France. Same bank and destination as the document above, executed within the same week. 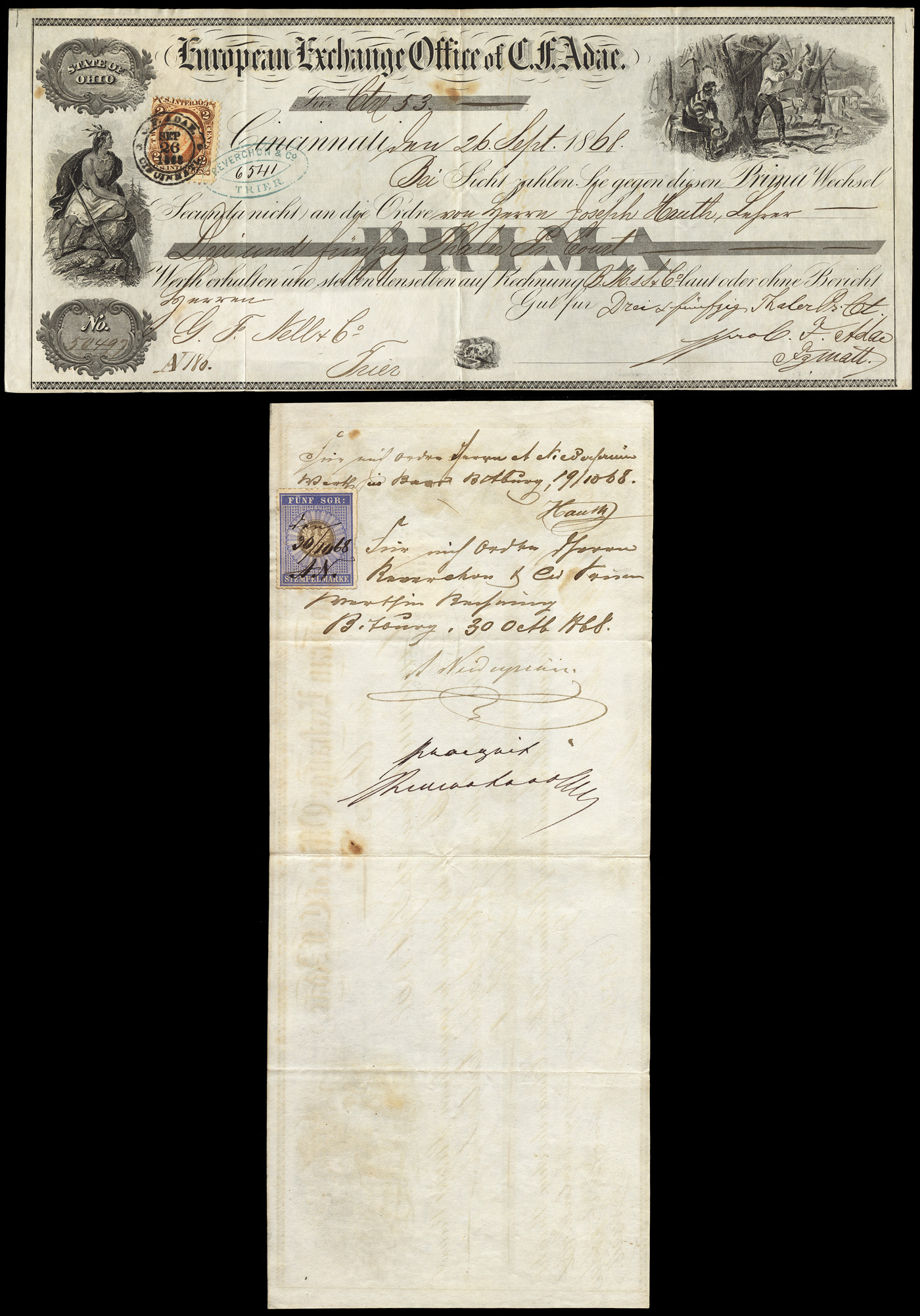 Purchased from a seller in Germany, this is an R15c on an attractive foreign exchange with two vignettes from the European Exchange Office of C. F. Adae, a Cincinnati, Ohio banking house. Not only is there a German revenue stamp also affixed to the reverse, but the R15c is tied not only by a C.F. Adae circular handstamp cancel, but also a blue oval of Reverchon & Co., a German banking house in Trier. Fantastic document! 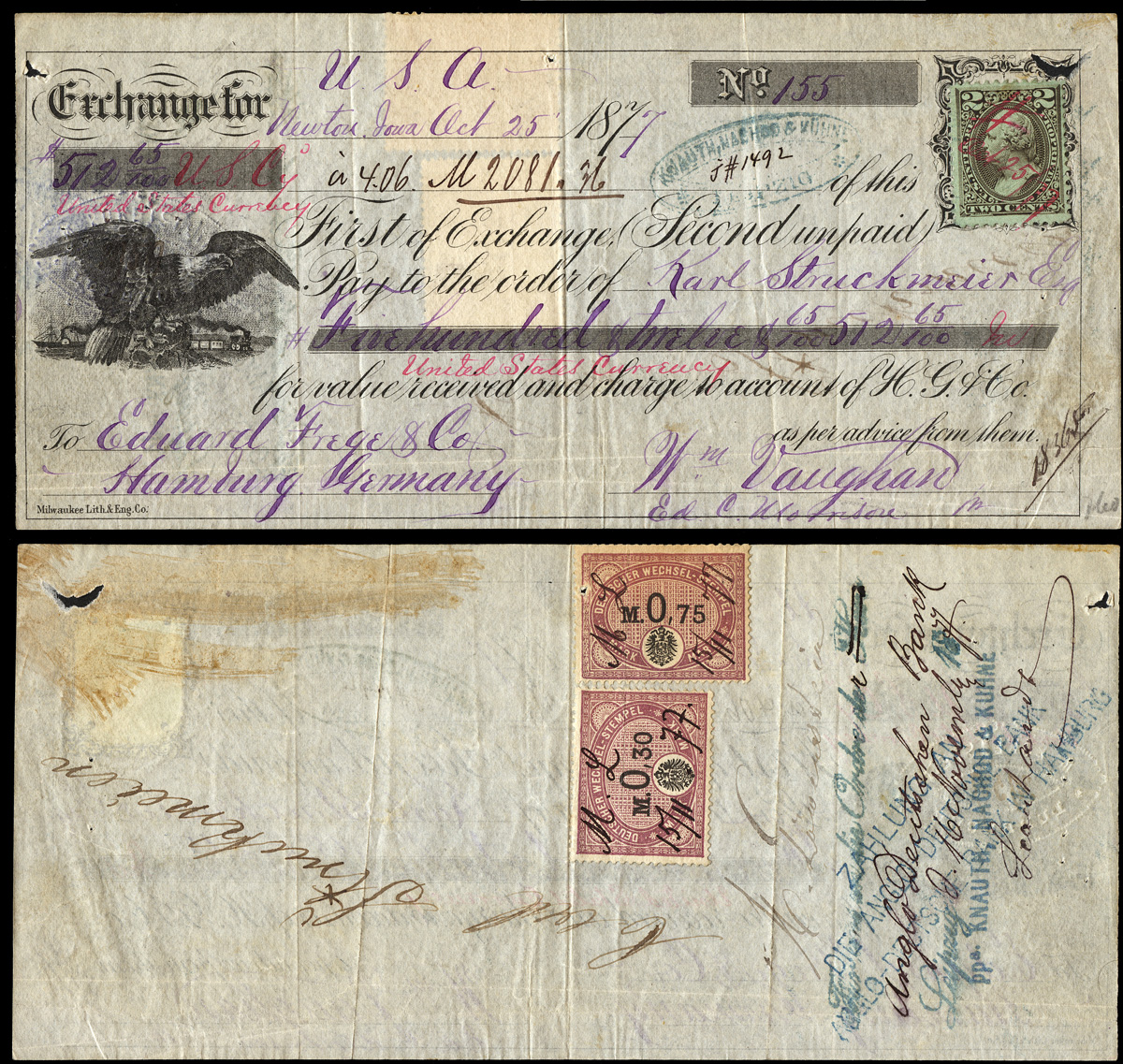 Doubly scarce: an illegal use of a proprietary stamp as postage on a foreign exchange document, along with German revenue stamps affixed to the reverse. 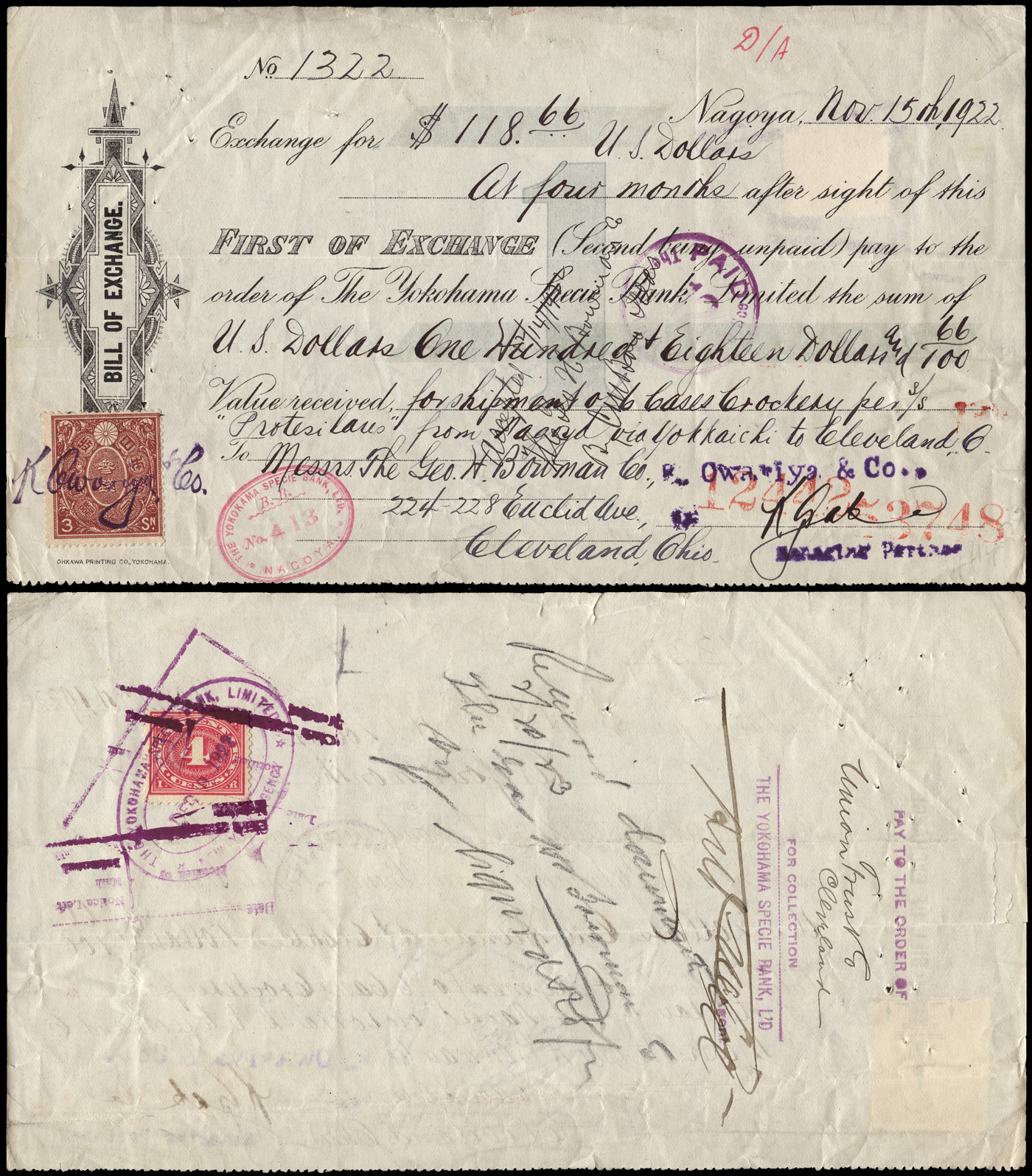 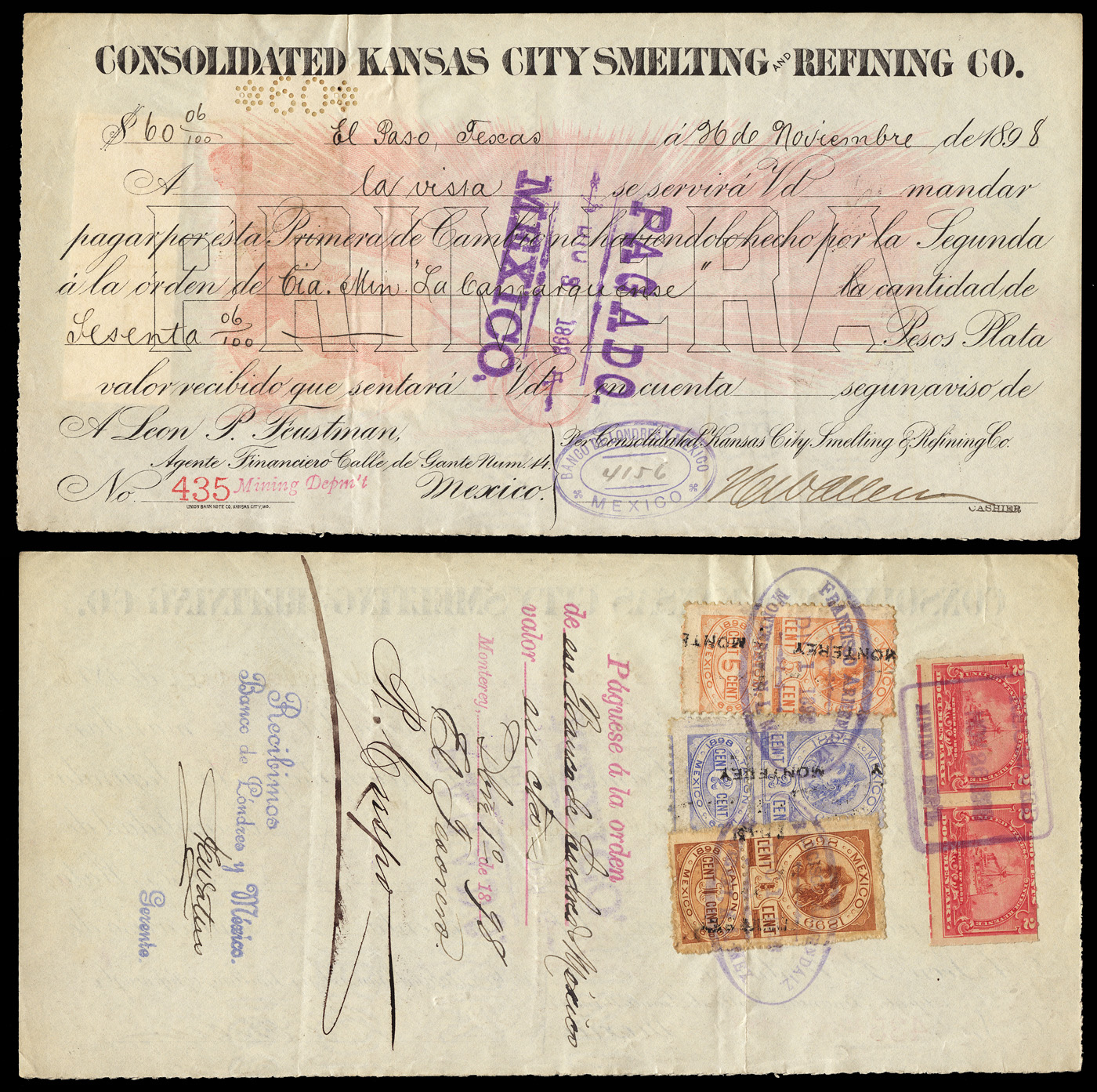 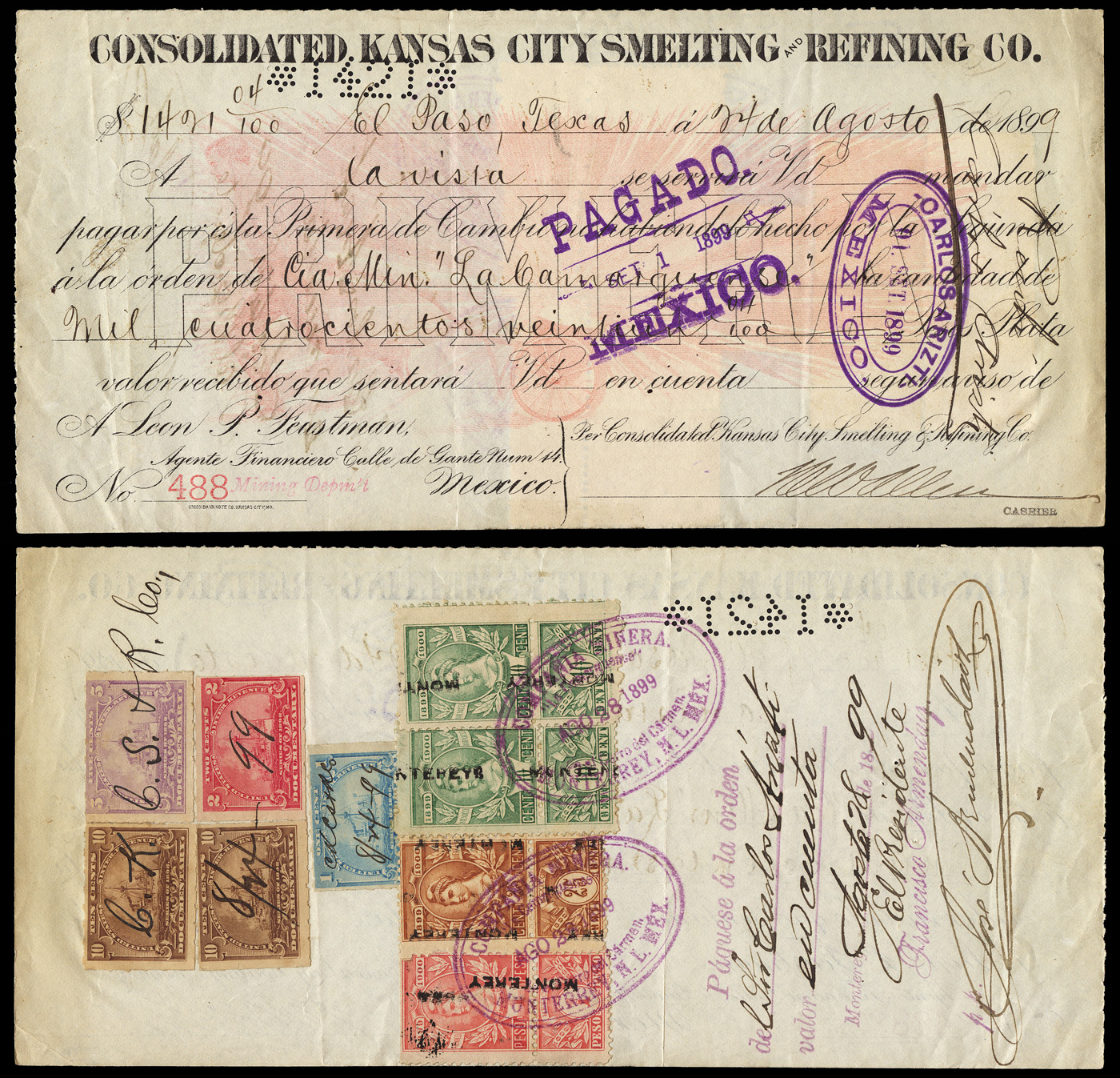 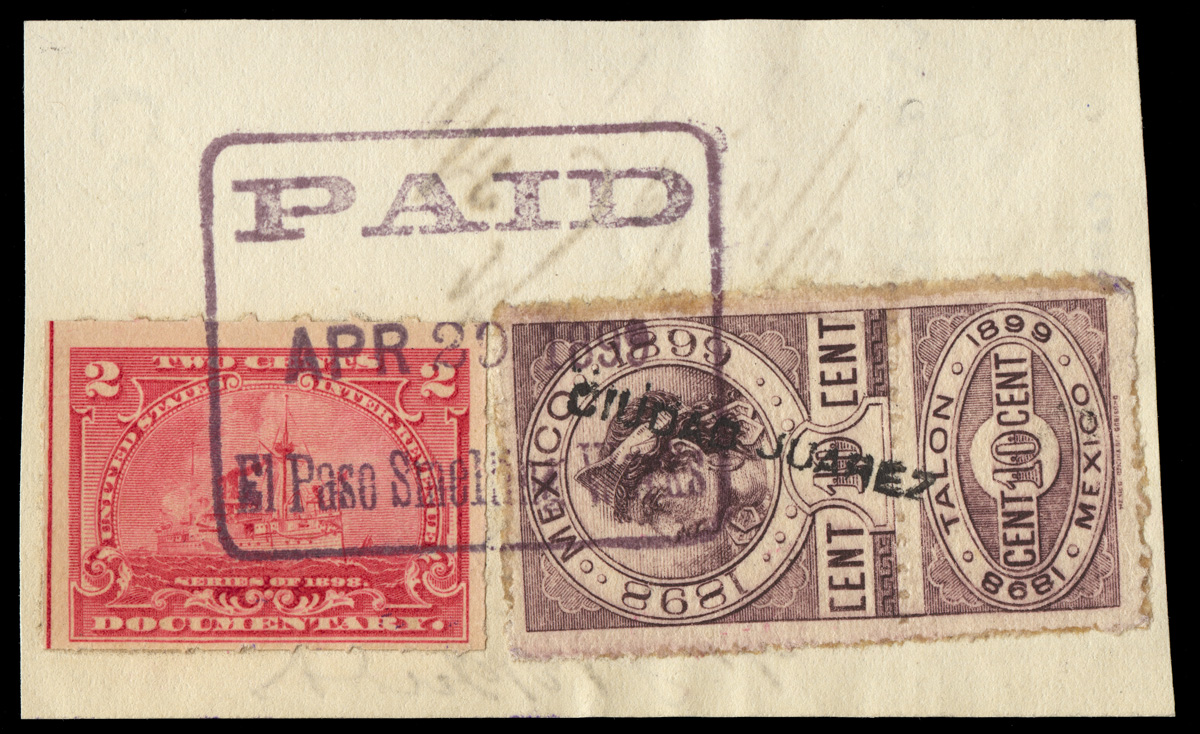 2-cent battleship documentary along with a Mexican revenue stamp on a document fragment. 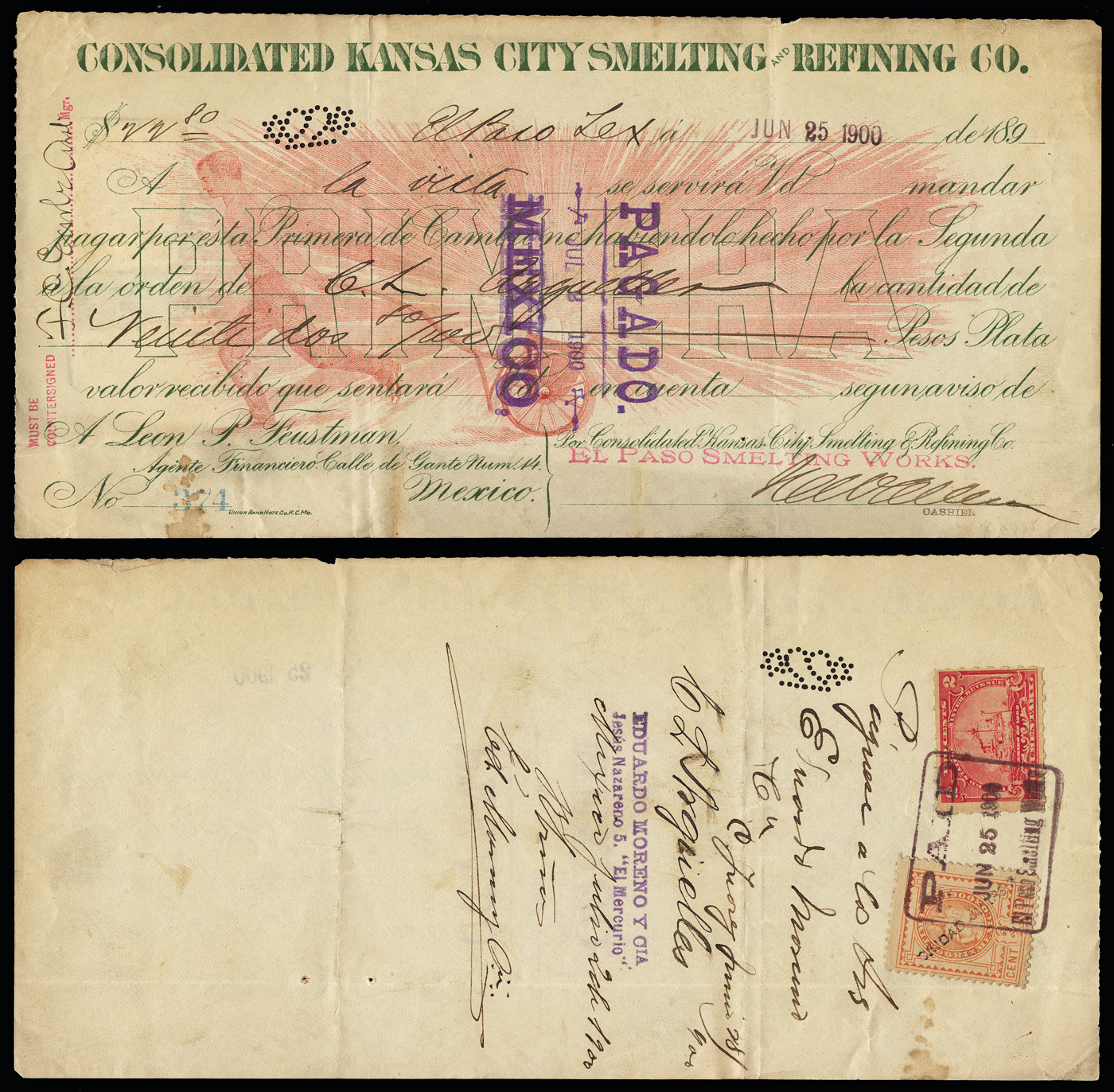 U.S. and Mexican revenue stamps both on a document from the Consolidated Kansas City Smelting and Refining Co. 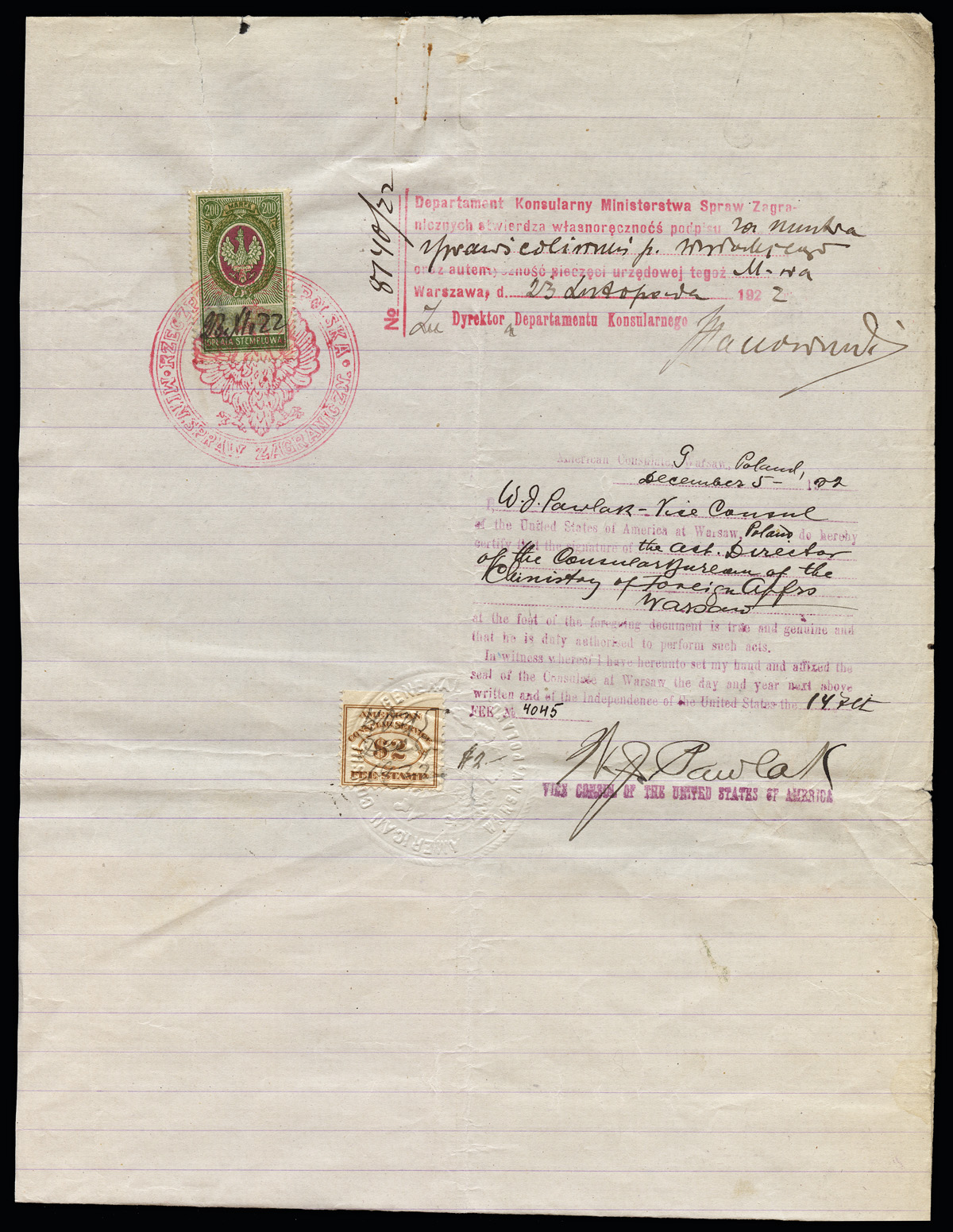