These items are shown here for reference purposes. They may be deliberate attempts to fake higher-value stamps, or they may be items that turned out to not be what they were thought to be when expertized.

Click on any thumbnail below to pop up a window with a larger image and more information. 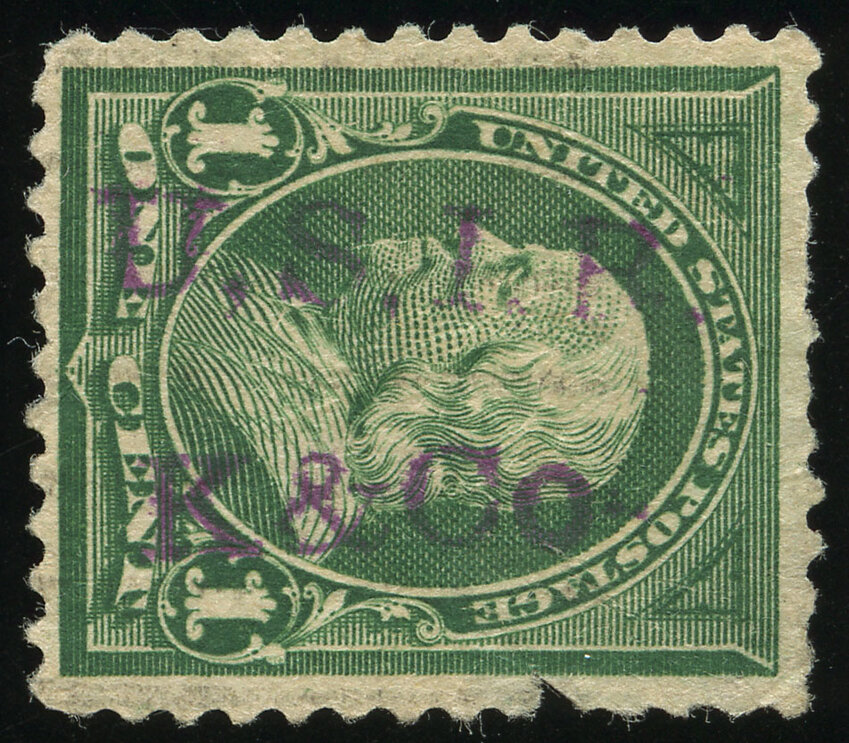 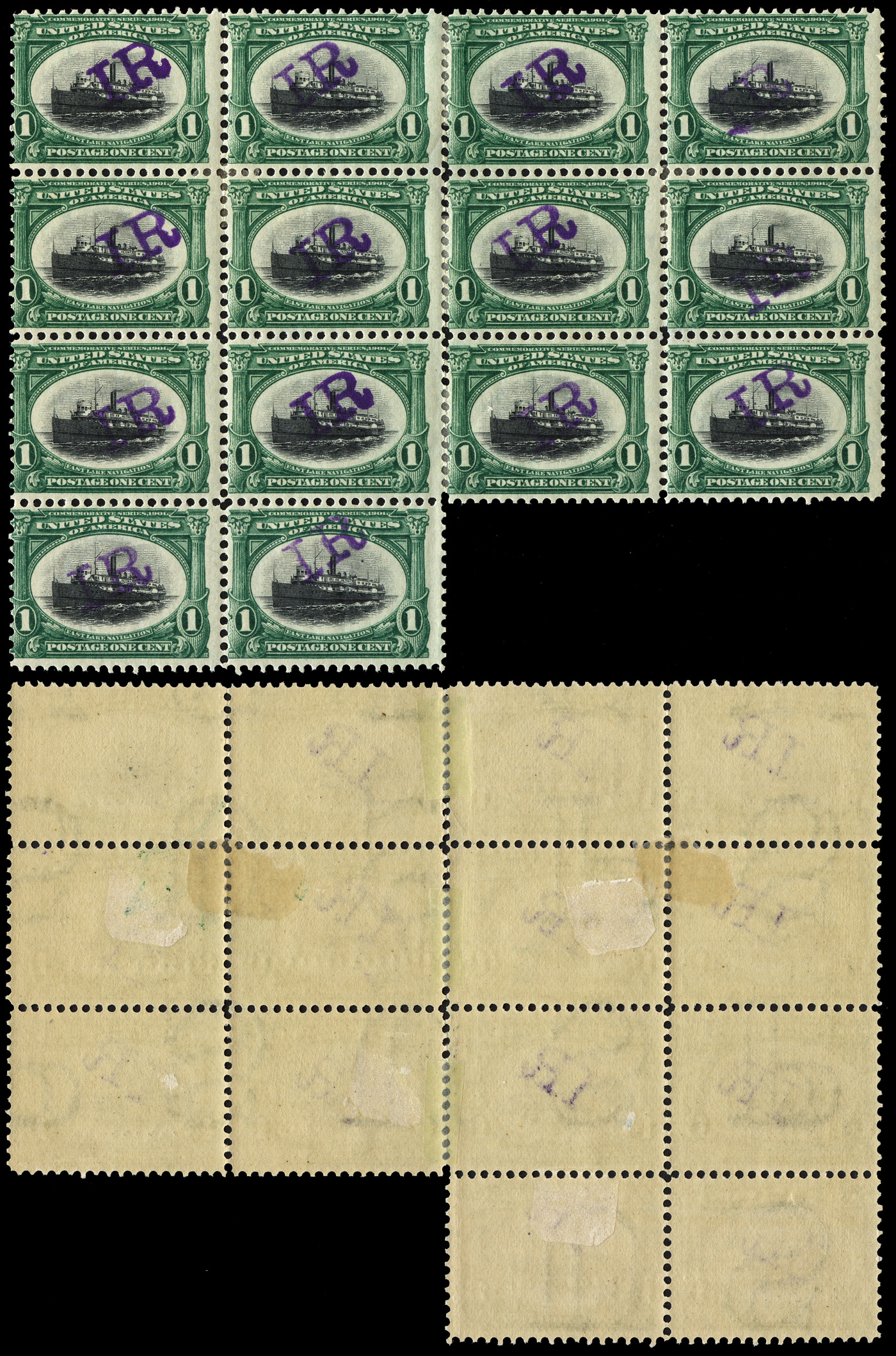 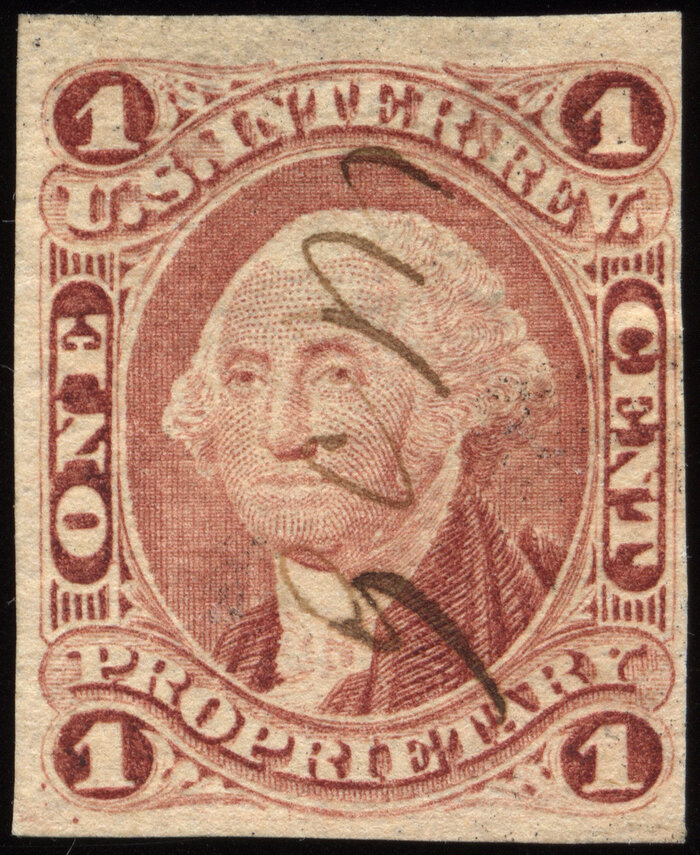 1986 Philatelic Foundation certificate. Purchased as a fake, the decision is an interesting one. I have no doubt that it is not an R3a; the side margins are too tight. However, I question their determination that it is an R3d (silk paper). I scoured both sides of the stamp with 30x magnification and could find no evidence of blue silk threads. Making such a determination based on ink or paper color is not conclusive. 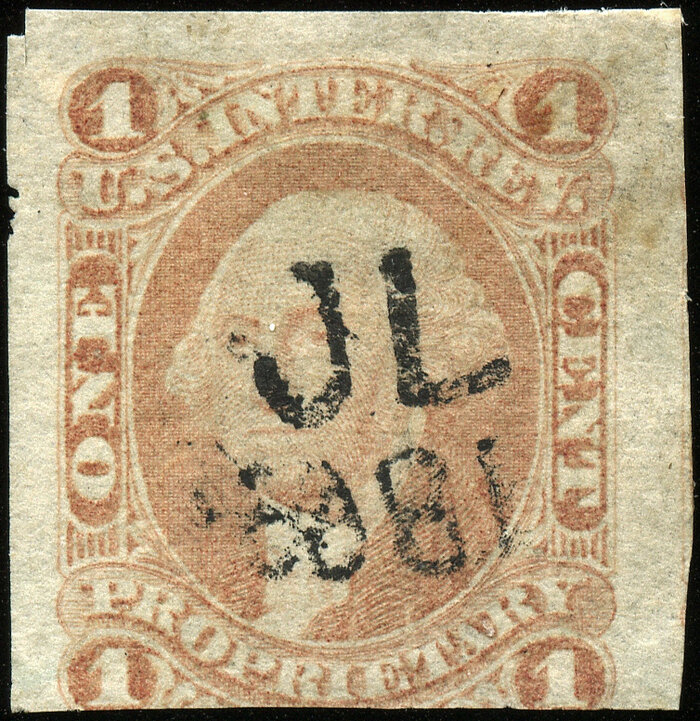 R3b trimmed at top and bottom to appear to be an R3a. Handstamp with inverted year slug. 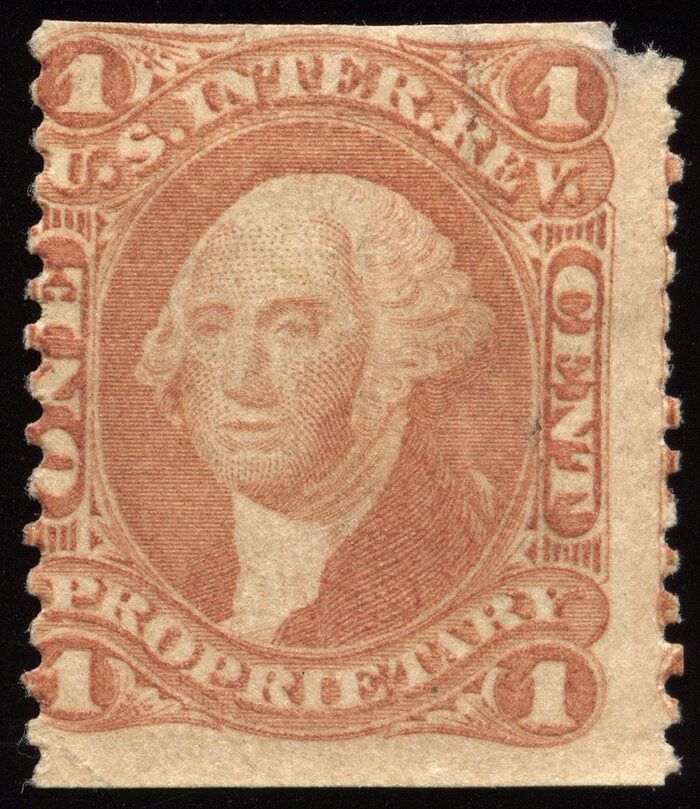 Has characteristics similar to the Hart L. Pierce counterfeits. 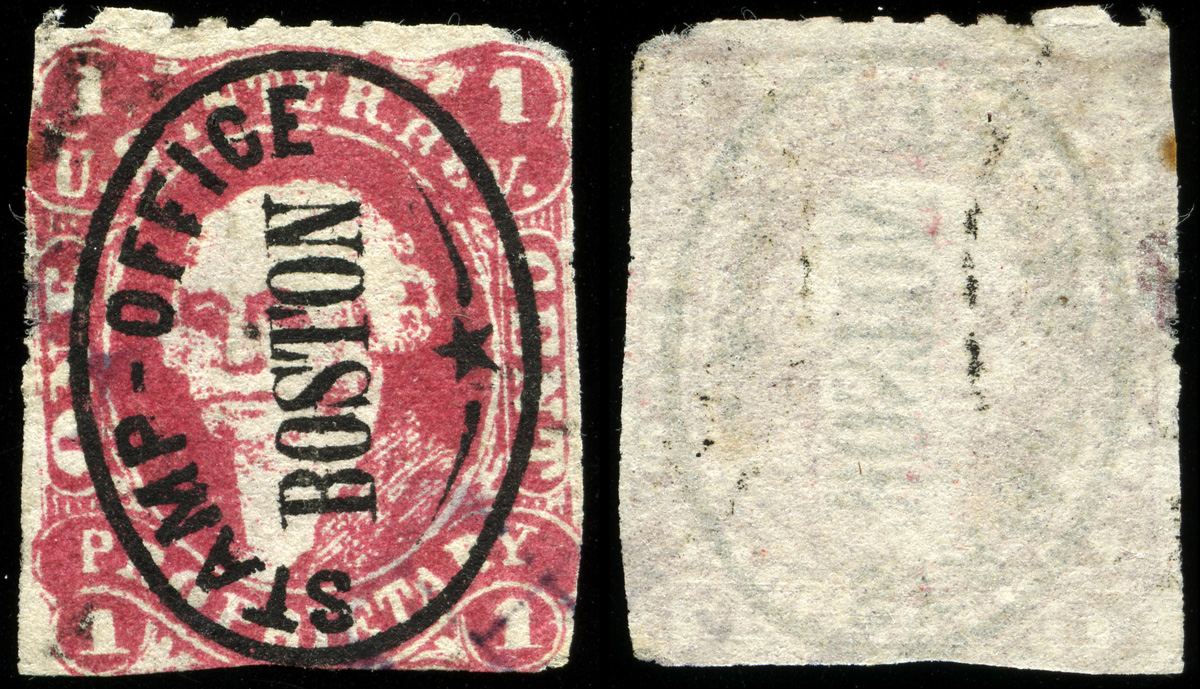 This one is a true oddity. Is it a counterfeit, a college/training stamp, or something else? The design is VERY crude and the color is completely different from the actual stamp. It does not appear to be a modern creation, as the red is not composed of CMYK. 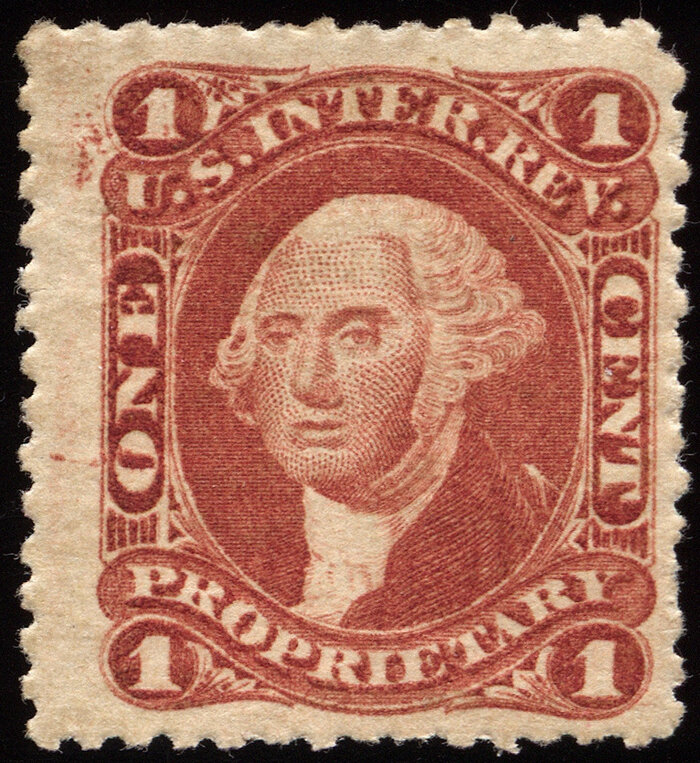 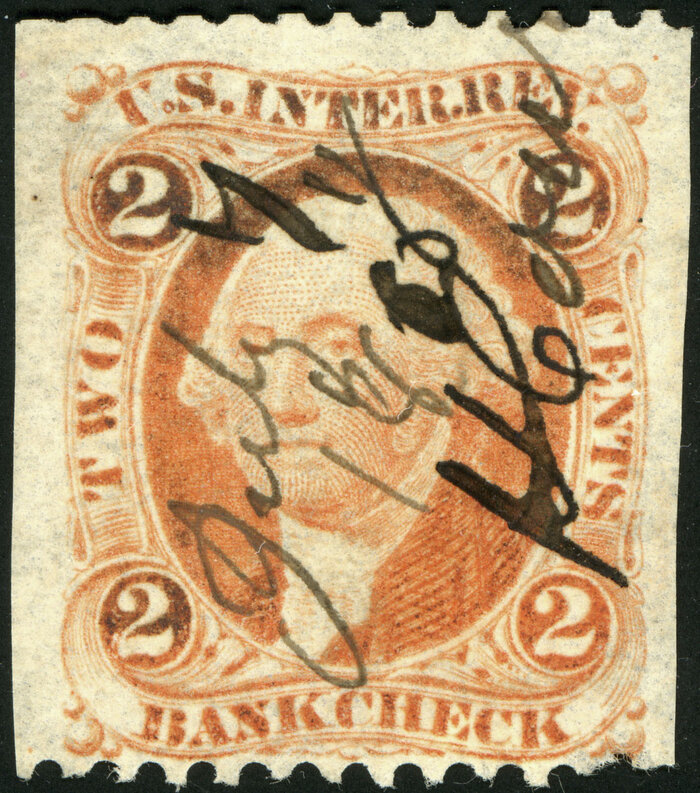 Likely a trimmed fake. The cuts at left and right don't look right. 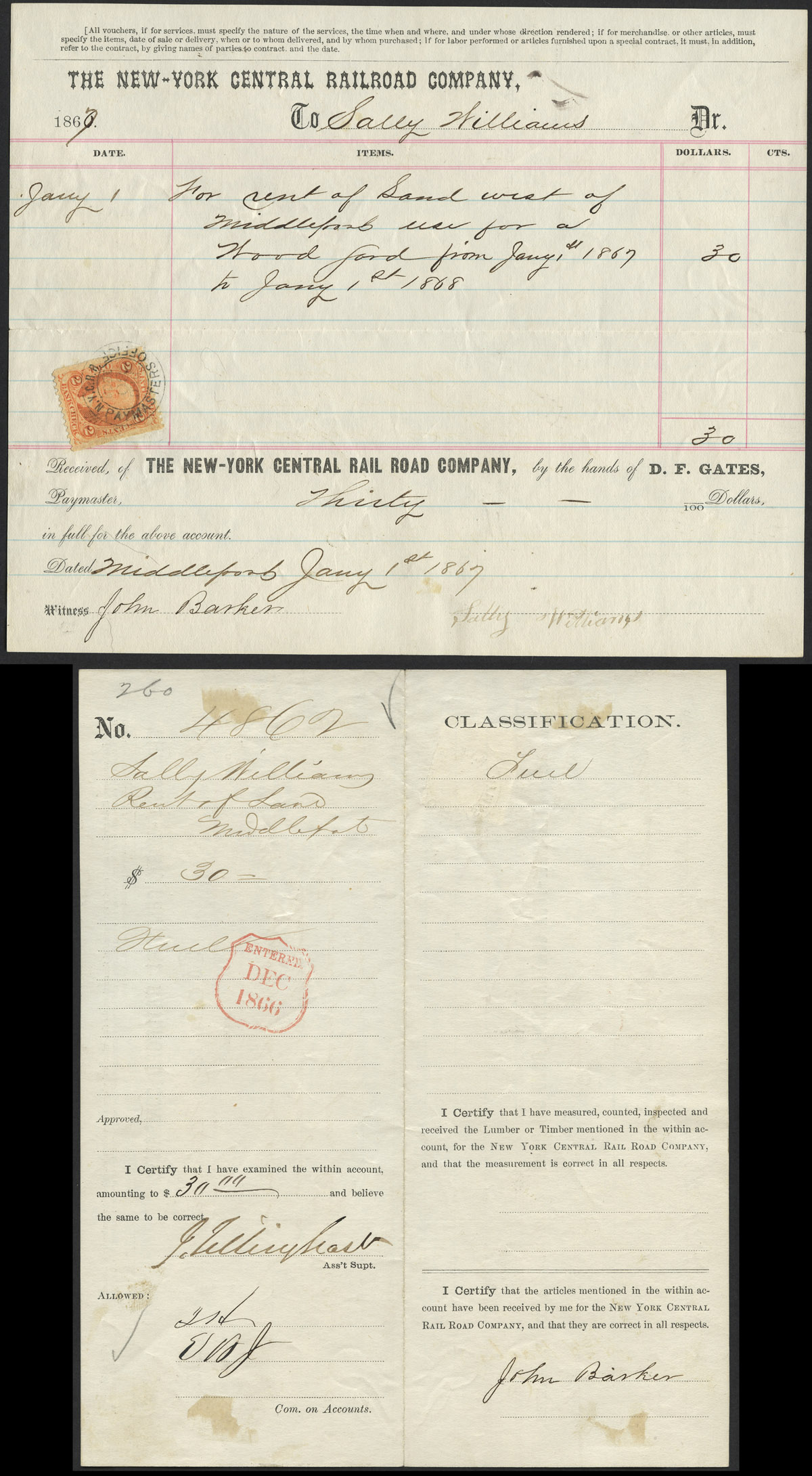 Trimmed to appear as an R6b. Close examination appears that the stamp was trimmed while still on the document. See this closeup image for a high-resolution image of just the stamp. 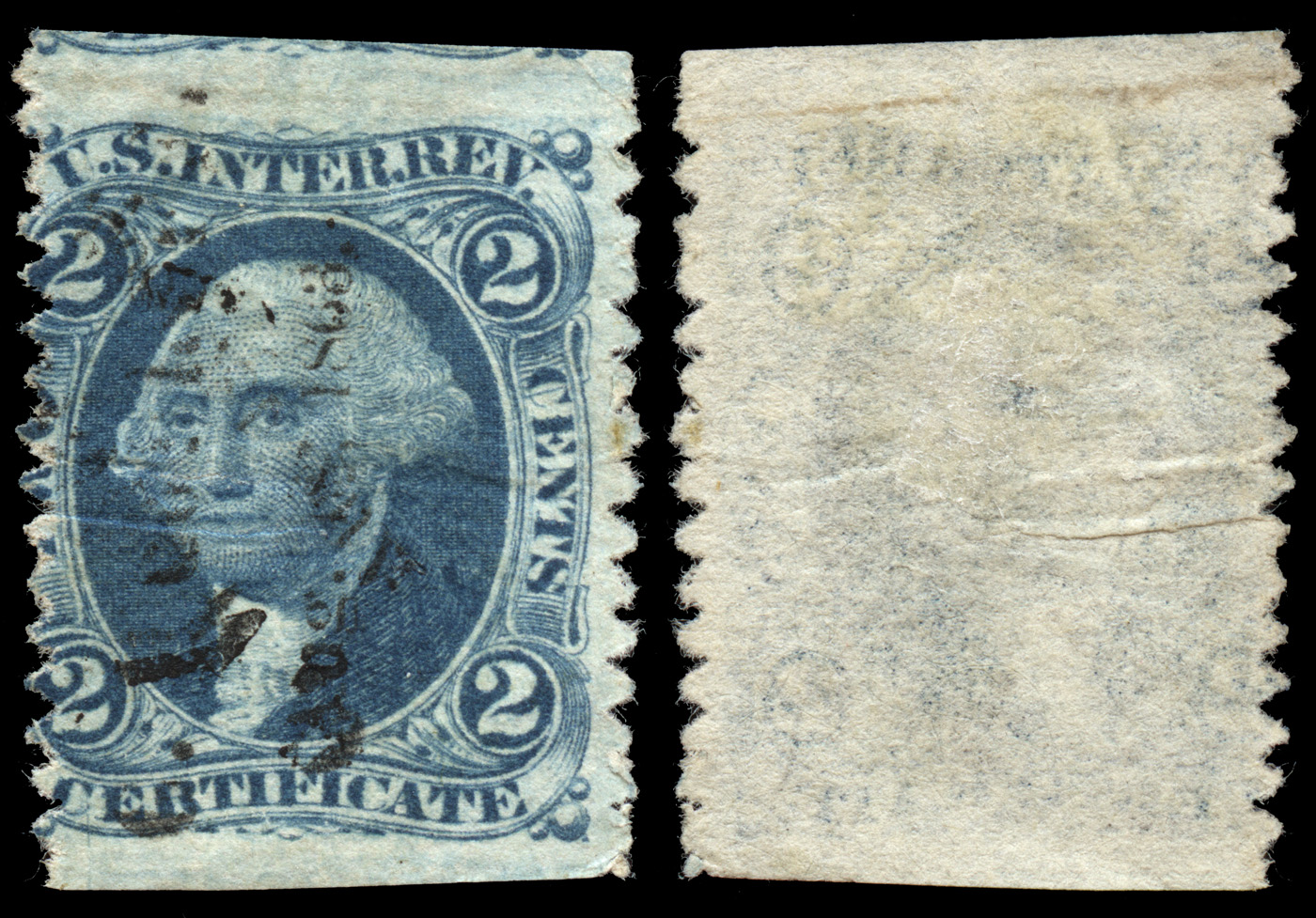 Listed as a fake because R7b doesn't exist. Likely created from an an imperforate R7a, but the question is why? It doesn't make sense as a philatelic forgery. The perfs are jagged and nonstandard. I posit that it may have been privately done for the sake of expediency and functionality, similar to the private sewing machine perforations. Interesting regardless. 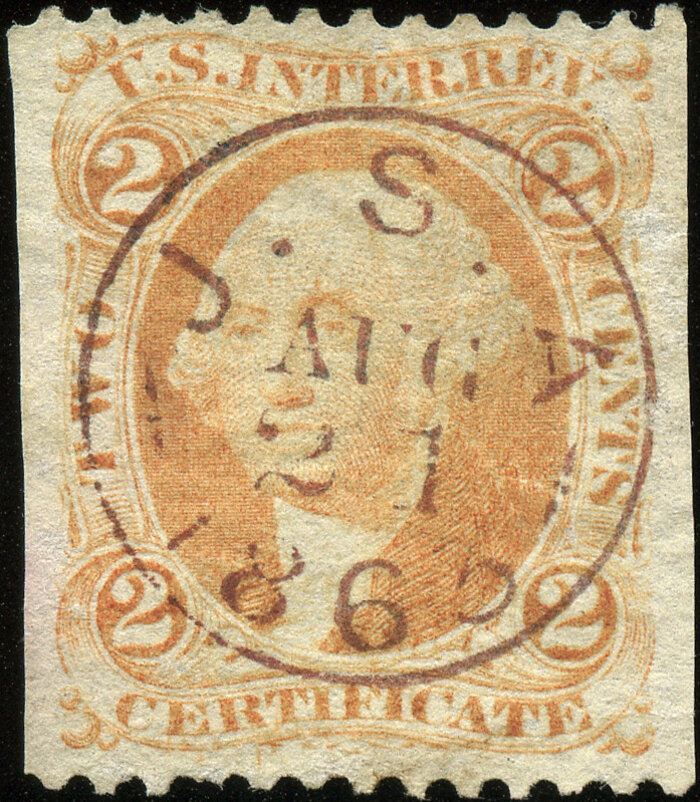 Looks like someone trimmed it in an attempt to create an R8b, which does not exist. Still has a nice cancel though.

Illegal usage of 2-cent Proprietary as postage on cover. Appears to be manufactured, as the cancel doesn't look right. 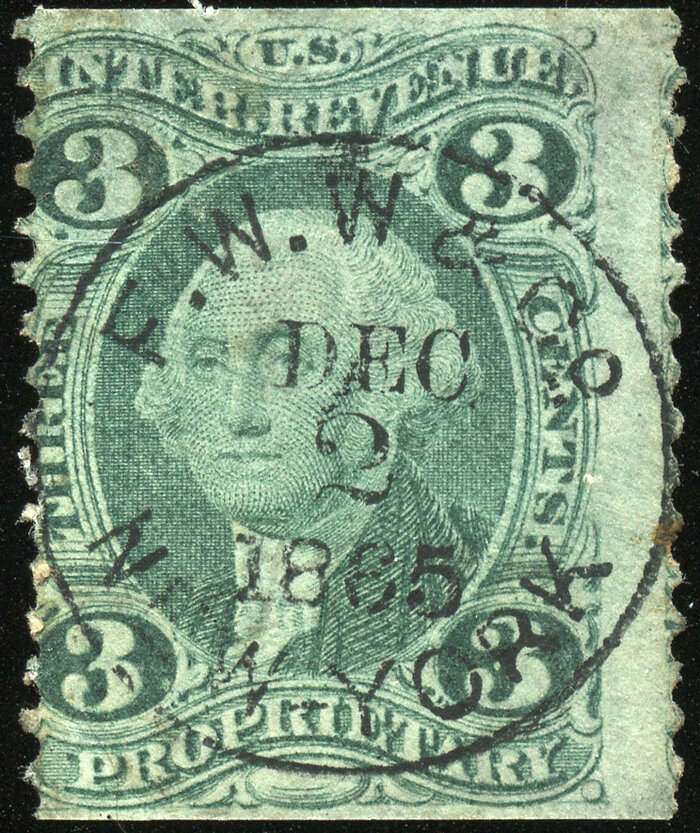 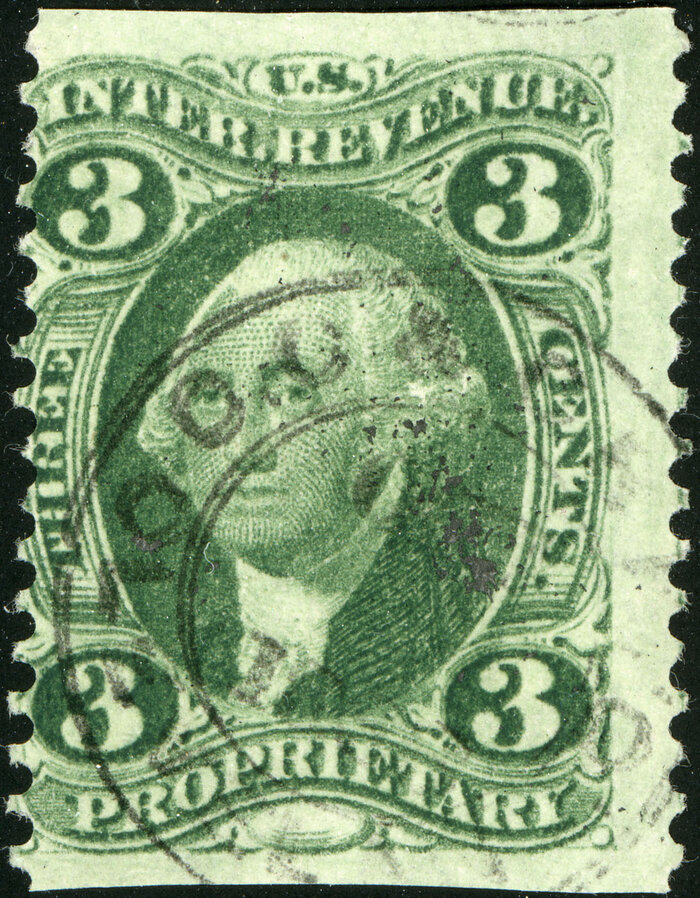 Wrong color for an early printing, in my opinion. Likely a misperfed R18c that has been trimmed. 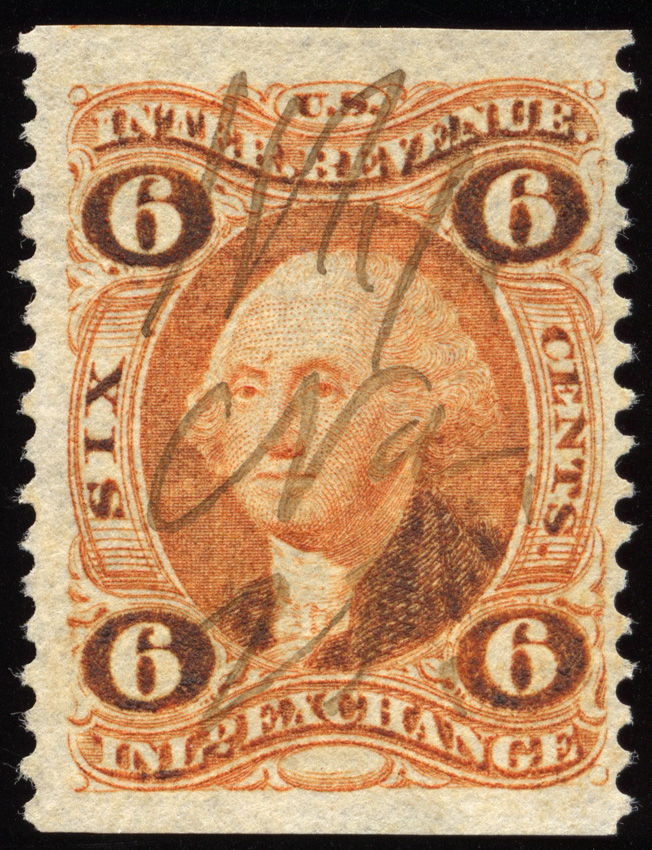 An R30b part perforate does not exist, which is why I have it marked as a fake. It had to have been trimmed, but that had to have been the largest top and bottom margins ever seen on the type. You can see just a hint of the stamp above at top. Even though it's bogus, it's an extremely neat item. There has subsequently been discussion that this may actually not be a fake after all, as this is not the only known example of a possible R30b that is very convincing. 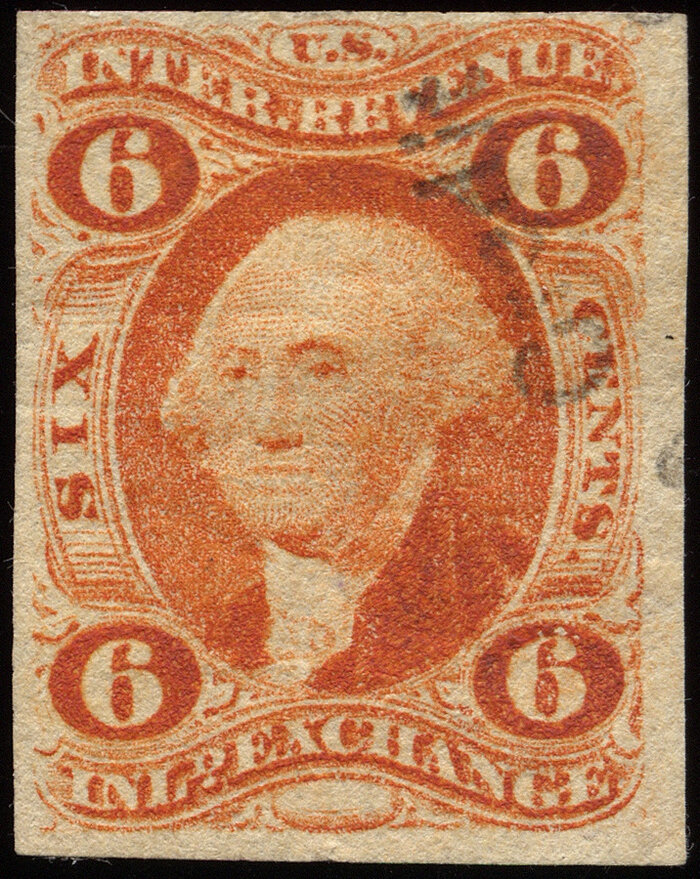 Someone attempted to fake an R30a (which does not exist, according to Scott) by trimming perfs off an oversized R30c.

Ship brokers. Vertical pair with great handstamp cancel. Unfortunately it's actually a pair of R32a that someone has added perfs to at left and right. 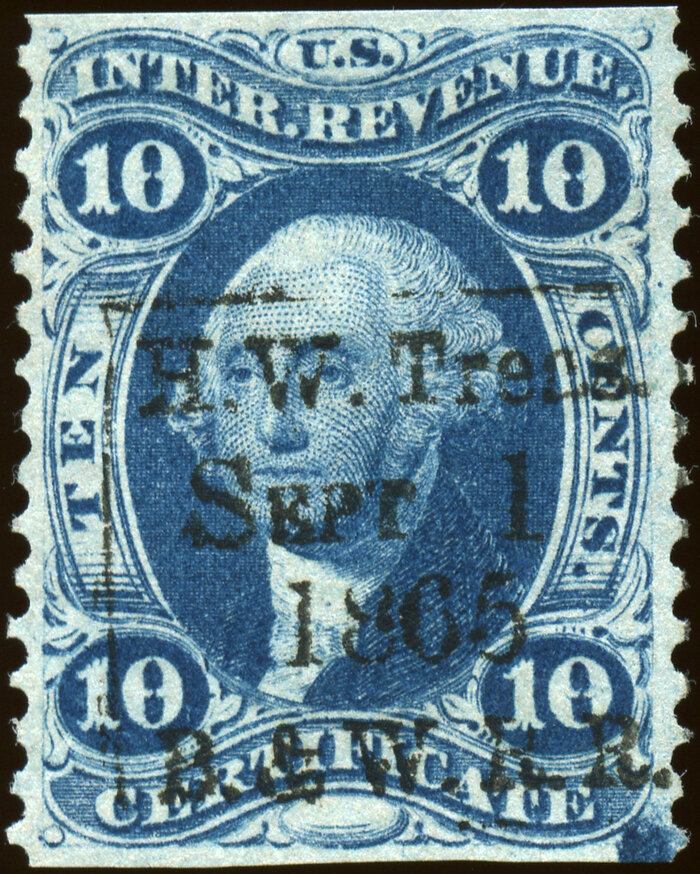 The top and bottom margins are too small and a bit too uneven to consider this a legitimate R33b. 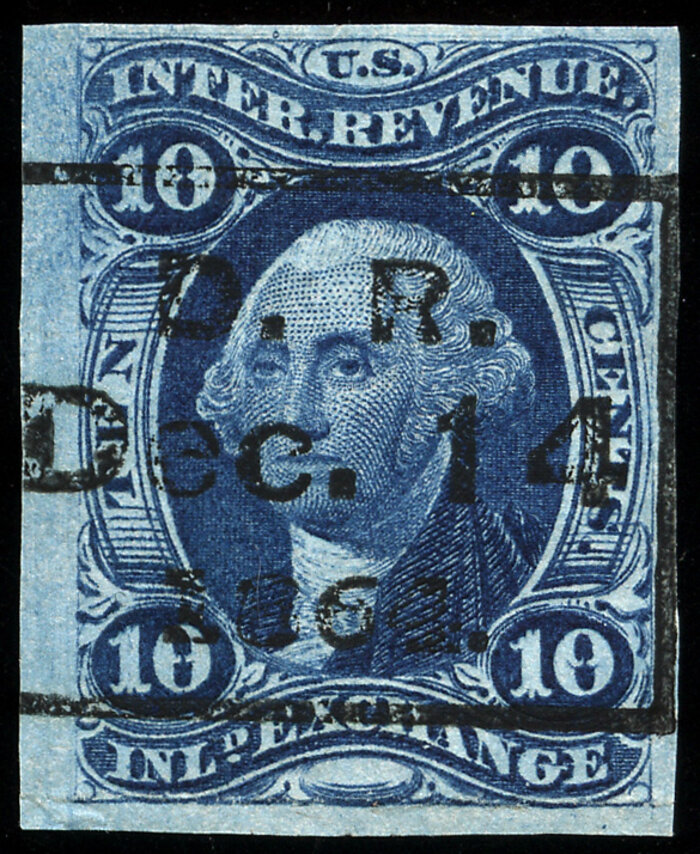 Cancel type N-11AX. The jaggedness of the cuts would indicate that this is a trimmed-down R36b intended to fool people as an R36a. There appear to be residual perforations at bottom. 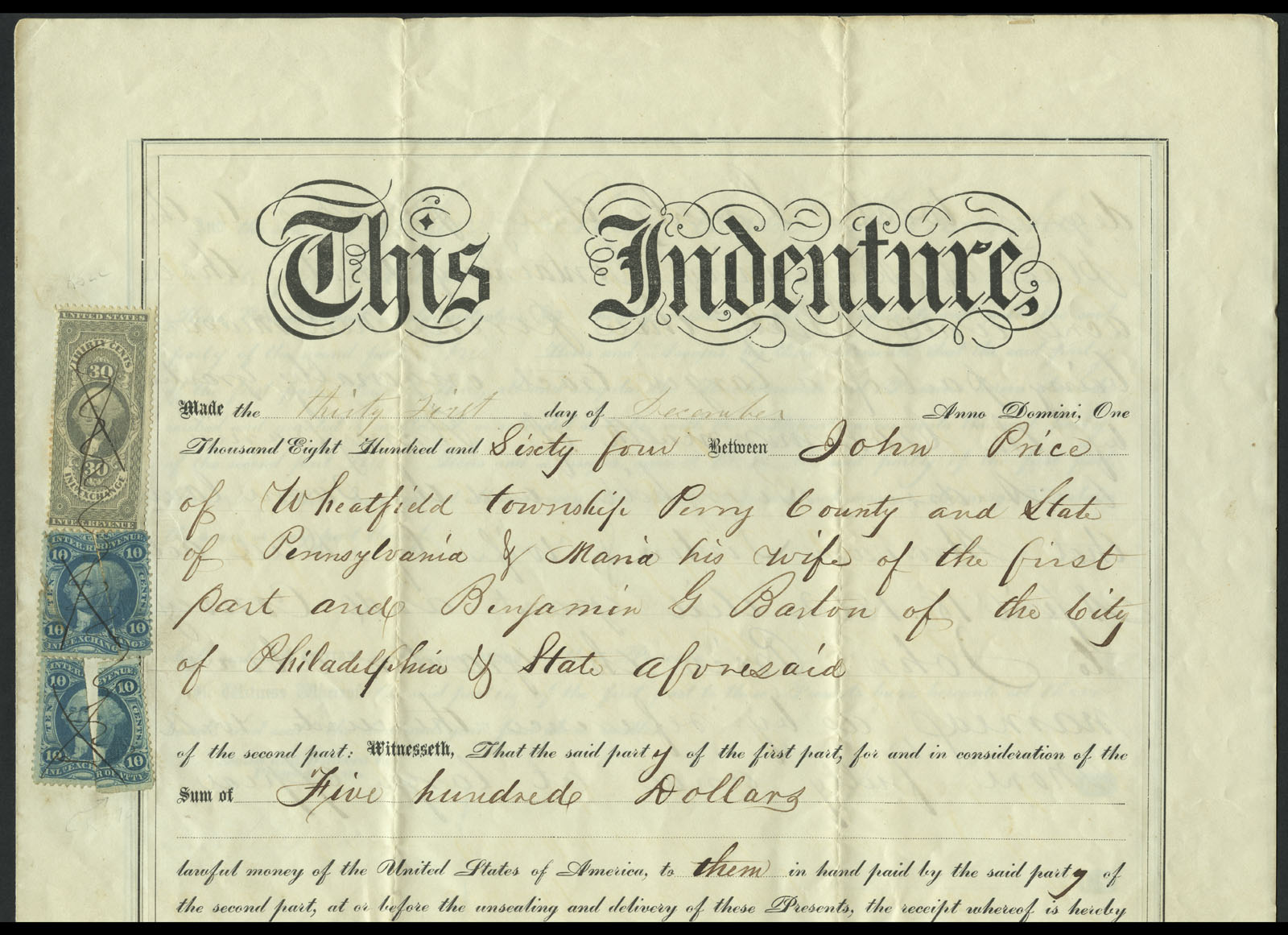 Very unusual! 4 'bisects' on one indenture document. Three partial R36c, two being halves of the same stamp, as well as a bisected R37b which is not listed in Scott. Together, along with the R52c, they comprise the correct 50-cent tax on the $500 transaction. I classify this as a 'fake' as they are not bisects in the truest sense of the word, more likely someone either (1) using up pieces on hand or more likely (2) trying to cheat the government by re-using uncanceled portions of previously used revenue stamps. Still an unusual and interesting item.

Great cancel, but top and bottom margins are too small to be sure that it is a legitimate part perf.

Fake overprint created in the 1930s by an enterprising stamp dealer.

Someone ruined a nice imperf pair in an attempt to create an R50b pair ($2,750). Those perfs wander all over the place.

Great cancel, but could be a trimmed R51c. The margins are small and a bit jagged. 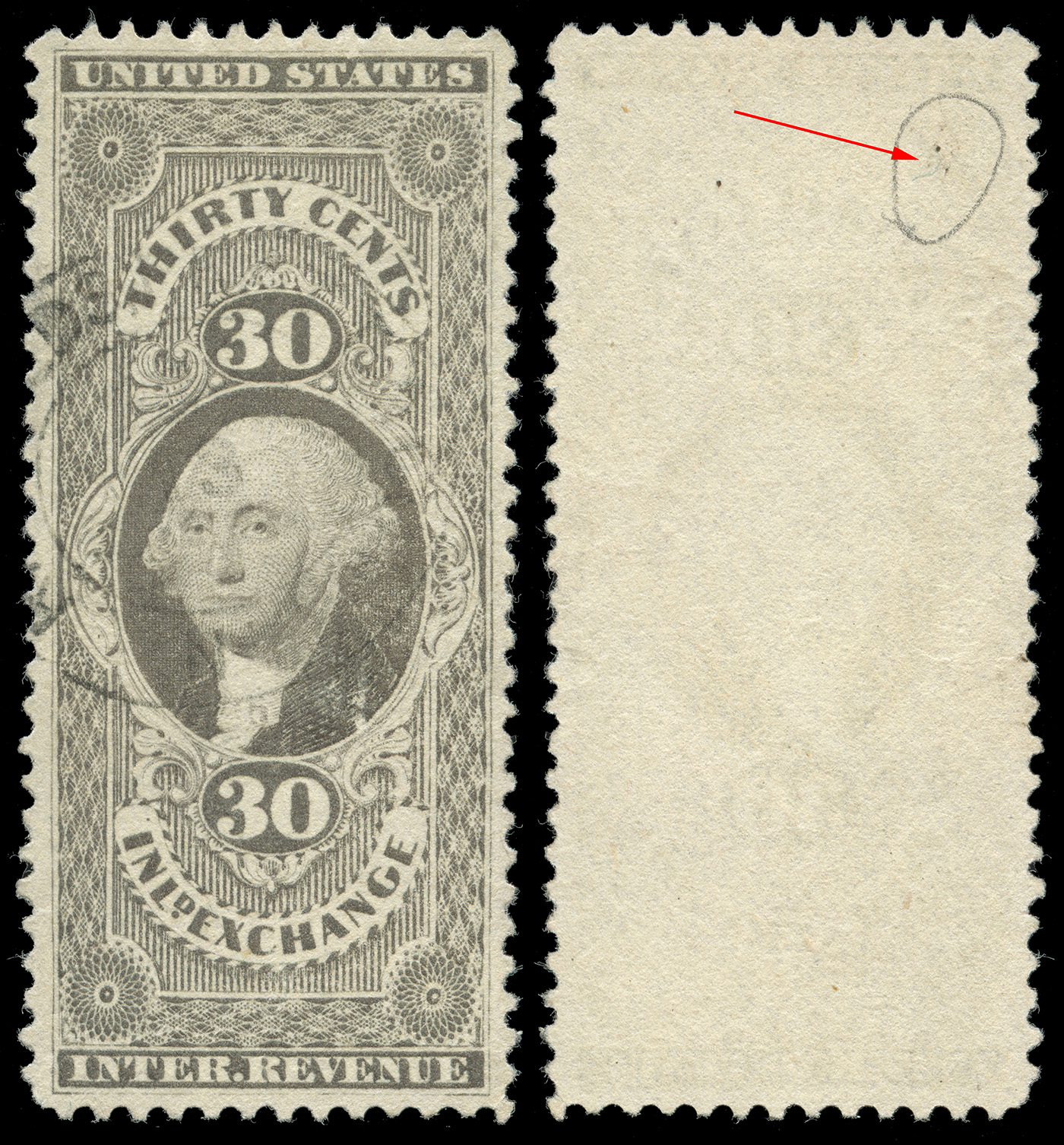 Silk fibers, but according to APEX 'not the silk fiber indicative of silk paper on the First issue' so apparently this is not a legit silk paper. Displayed here for informational purposes. 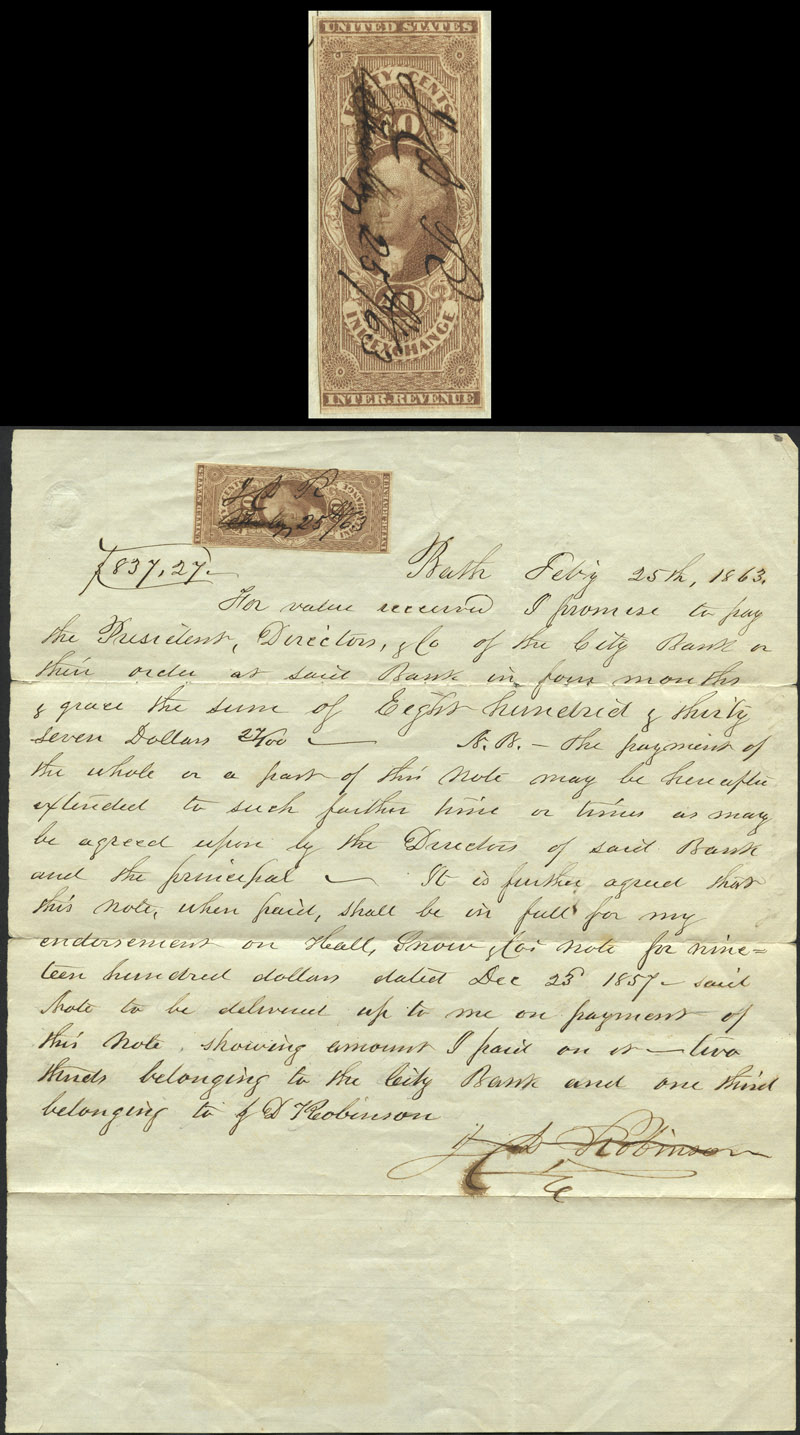 2018 Philatelic Foundation certificate. I have classified this as a fake, because the margins are virtually nonexistent, and it was purchased as being NOT a legitimate R53a. However, the stamp is barely tied to the document at the very top, so I do not believe it to be a philatelic creation. Rather, for whatever reason, the party originally affixing the stamp trimmed it close. There is no way to know if this stamp is an R53a, R53b, or R53c. Still, an interesting item. Subsequently received a declined opinion from the Philatelic Foundation, as expected.

Actually it isn't a real R53a. It's most likely a margin copy of R53b that has been trimmed down in an attempt to fake an R53a. Nice try. 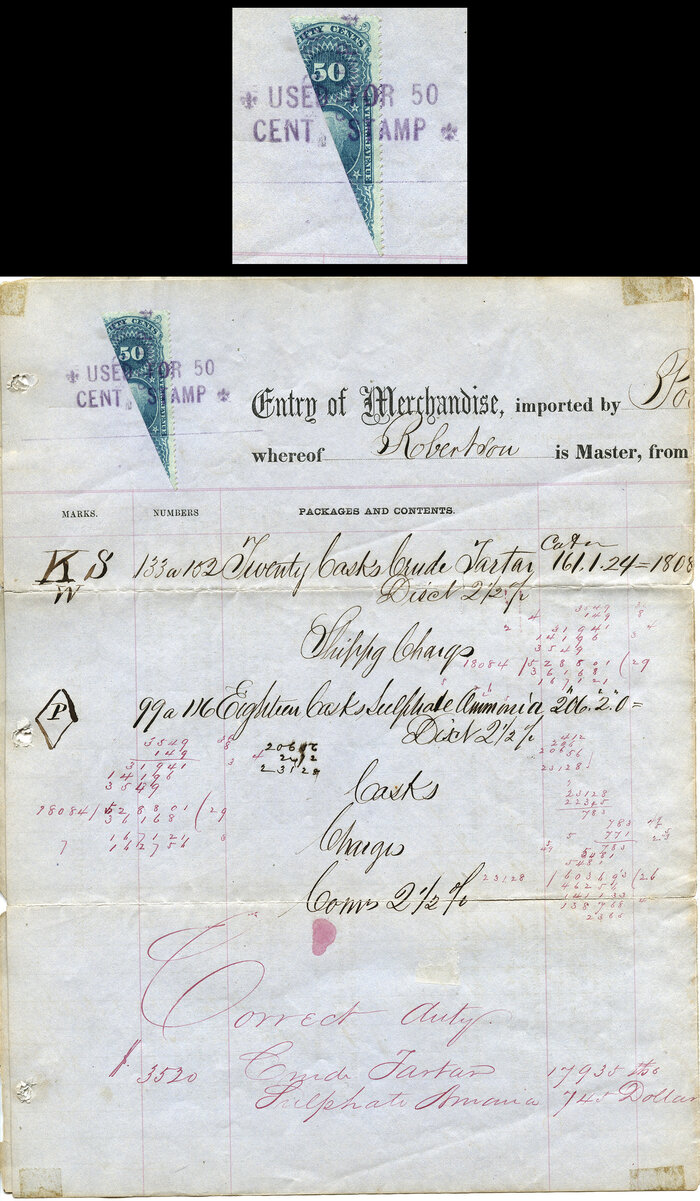 Fake bisect and overprint created by a dealer in the 1930s. Note that the stamp was overprinted twice, once before being affixed, perpendicular to the overprint on the document.

A reference piece. The 50-cent Life Insurance part perf is not listed in Scott as being found imperforate vertically. Also, the 1867 date is far too late to be a genuine part perf. 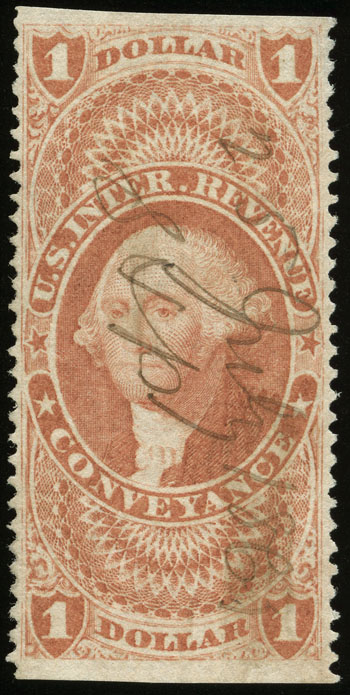 2011 Philatelic Foundation certificate. Purchased as a fake for reference purposes. An R66a that someone perforated on the left and right sides. The perforations are the correct gauge (12), but are too irregular. 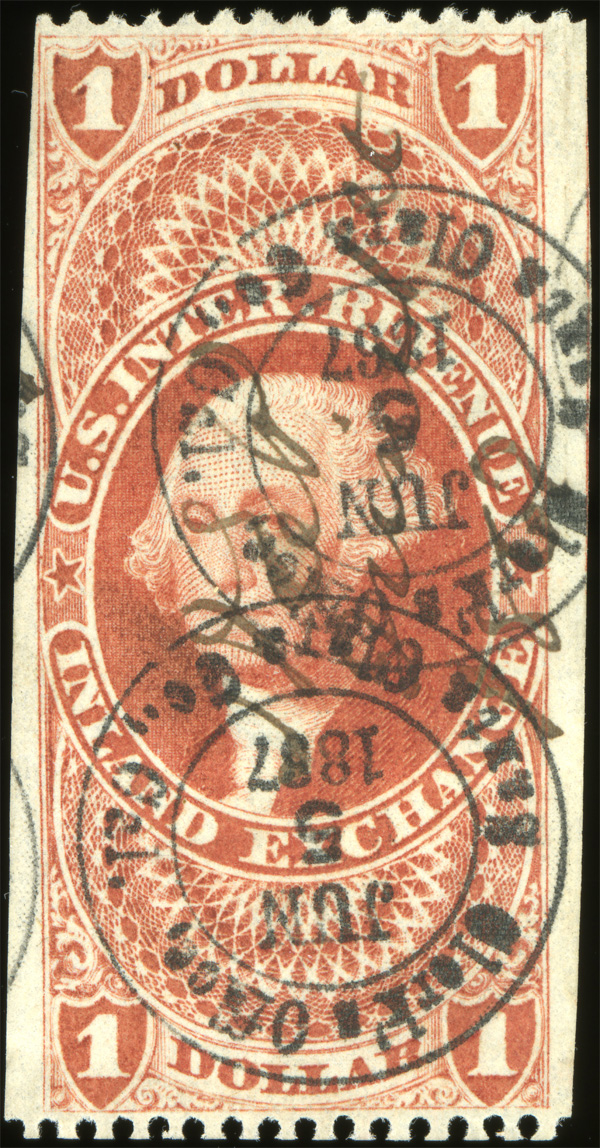 2011 PSAG certificate. Is actually an R69a imperf that has been perforated on two sides to fake an R69b. It's too bad, as the imperf was actually a nice example of one of the 'late date California imperfs'. 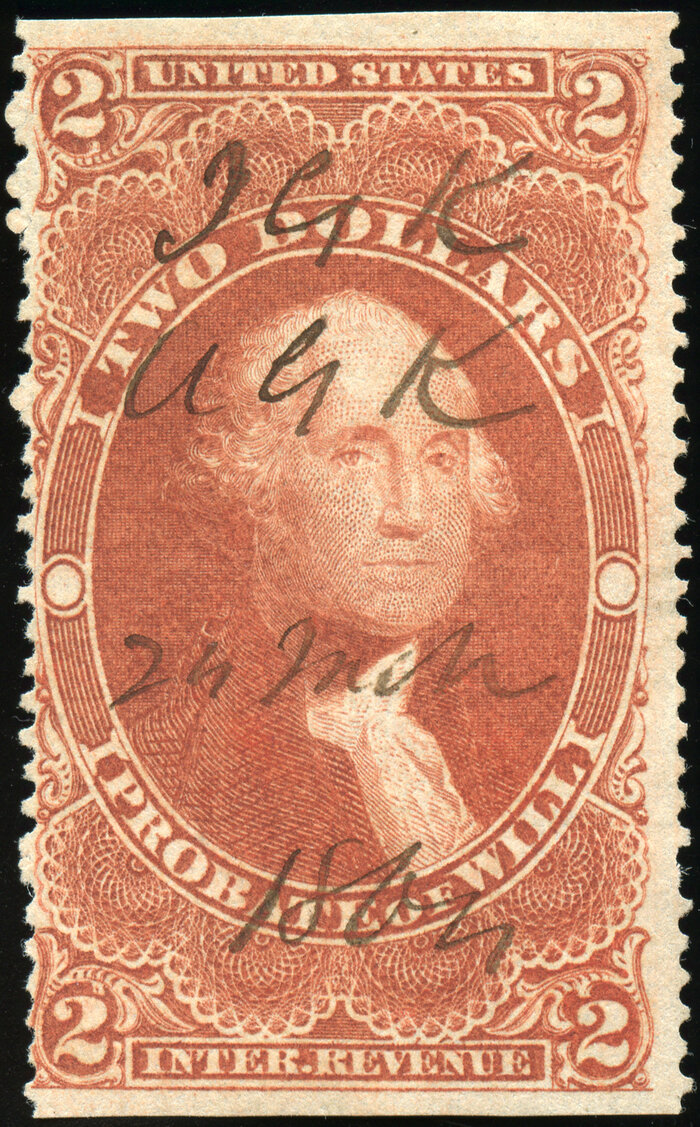 According to Scott, this doesn't exist. Most likely an R83c margin copy that someone trimmed top and/or bottom perfs from. 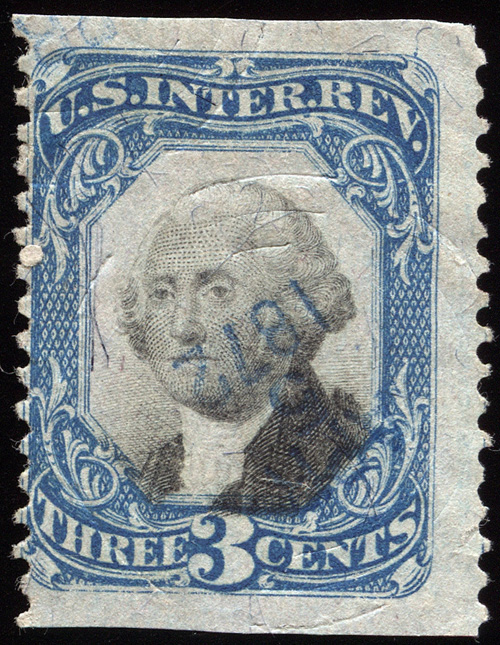 There were no part perforated 2nd issue revenues, so someone likely decided to get inventive and trim down an oversized example. 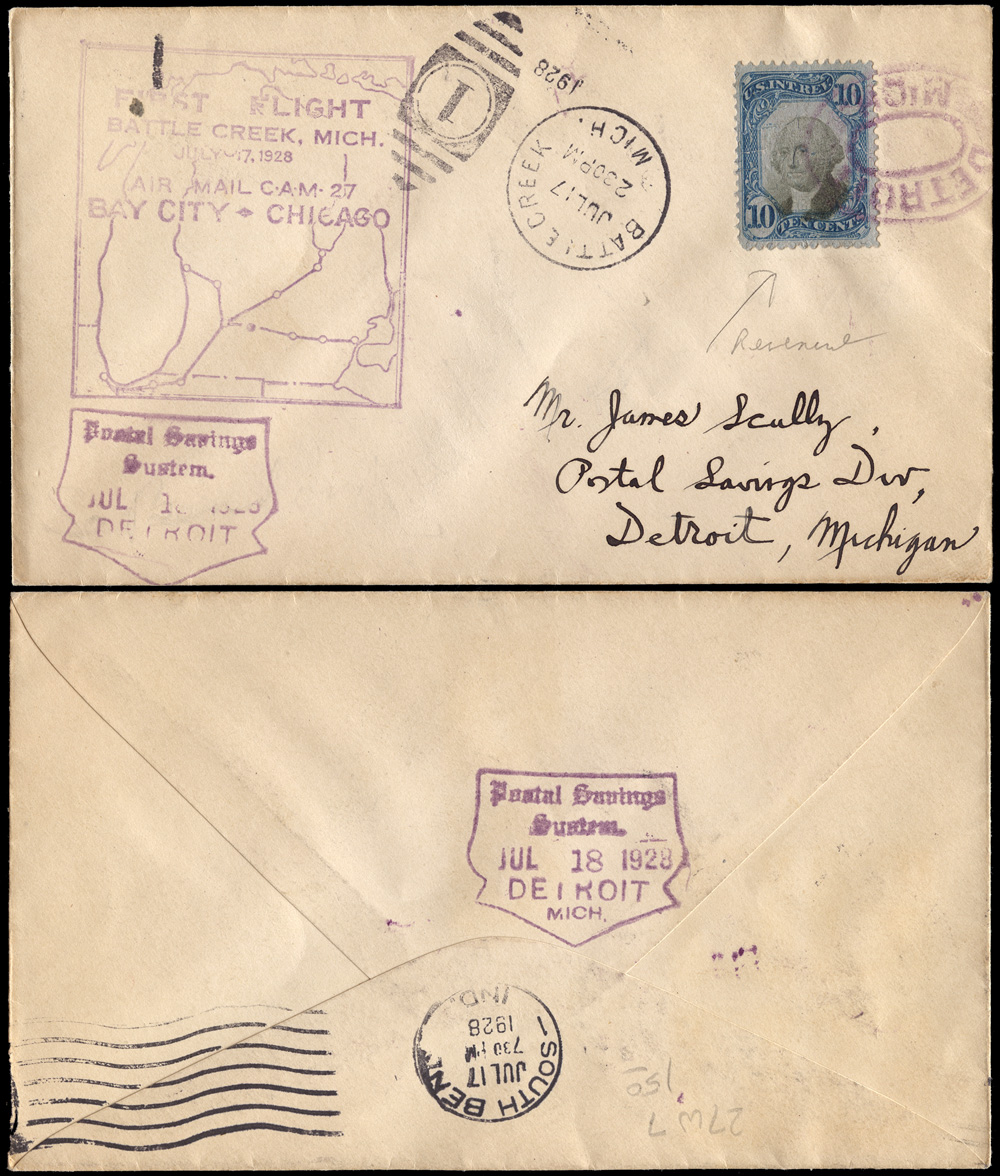 Likely a fabrication. Illegal use of revenue as postage on a flight cover. 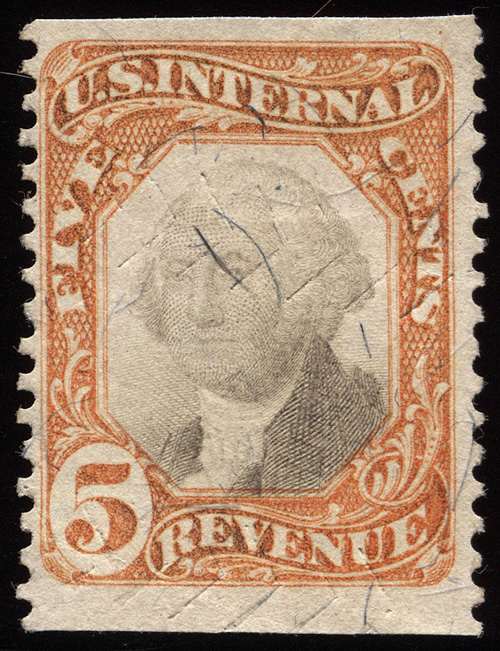 There were no part perforated 3rd issue revenues, so someone likely decided to get inventive and trim down an oversized example. 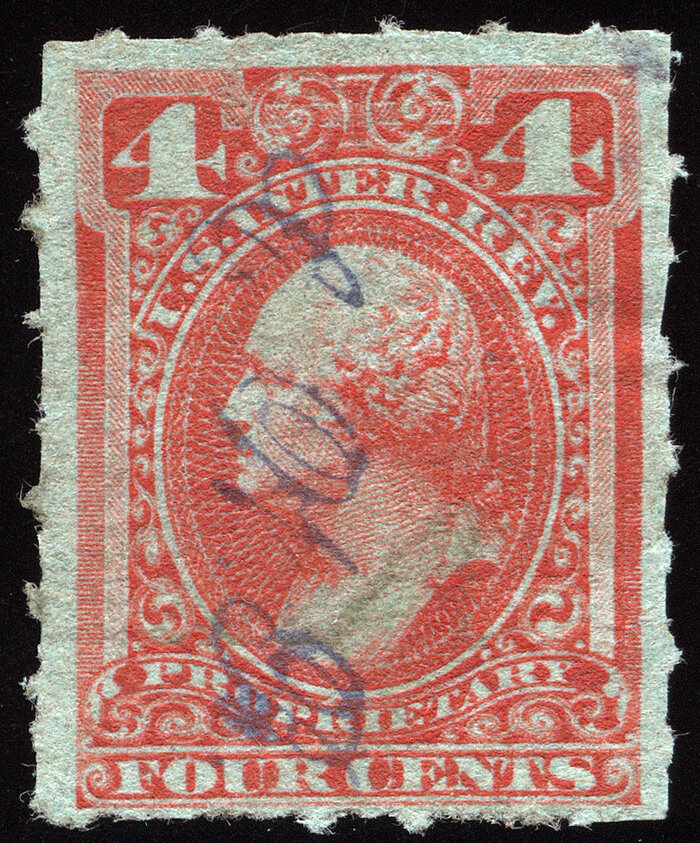 2009 APEX certificate. Purchased as a reference fake, a very crude attempt at faking roulettes. The only saving grace is the blue script handstamp cancel. 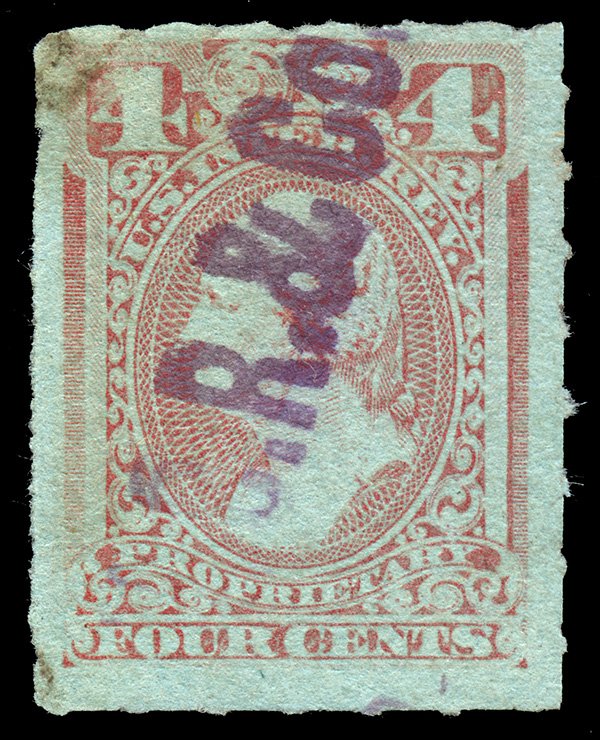 Faked roulettes. You can see the indents of the original perforations down the right side. 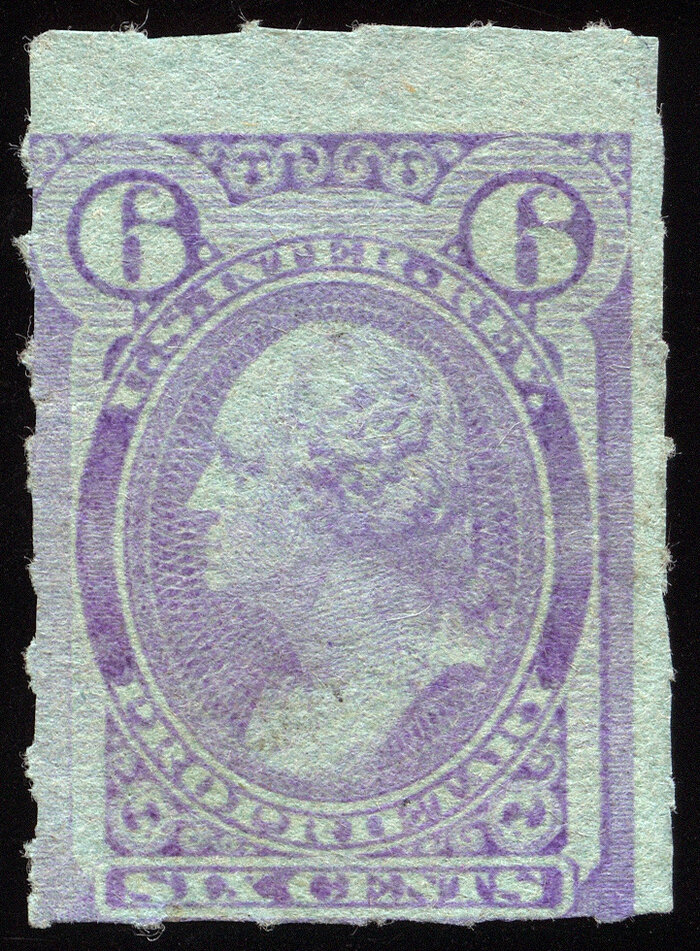 2009 APEX certificate. Purchased as a reference fake, this has got to be the most crude attempt at forging roulettes I have ever seen. The edges are crooked!