Last updated January 2, 2022 Thar She Blows! This Is One Whale Of A US Revenue Item!

[NOTE: This acquisition reinforces in my mind the importance of sending out wantlists to dealers prior to shows, as I have done for the past 10 years or so. The dealer who had this item brought it to Chicagopex solely because of my wantlist, as it was not part of their normal postal history stock.]

The item in question, while not without its faults/flaws, is one of the most unique items I've ever acquired, and fits perfectly within one of my collecting specializations. It doesn't really lend itself to display as long as it remains intact, yet I believe that it is important that it remains whole, rather than being broken down. Electronic images will have to suffice.

We'll start with some collateral that accompanied the item, in the form of an article from the 1960 American Philatelic Congress Book authored by Robert W. Murch. A newspaper clipping accompanying the article states:

Robert Murch is one of ten stamp collectors in the country who received President Kennedy's invitation to visit the White House at Noon, Thursday, August 31st (1961) for a special ceremony in observance of the new Commemorative Stamp issued Labor Day honoring the National Workmen's Compensation Law. Bob is currently president of the American Air Mail Society and is nationally known as a philatelic writer.

The text of the article follows.

Black Jack and the Whales

The time was during the hot, tense month of June 1862, when General Robert E. Lee assumed command of the Army of Virginia, the place was New Bedford, Massachusetts, whaling capitol of the world, and the ship was the stout Yankee whaler Globe bark-rigged, Alexander A. Tripp, Master. The voyage that followed, though a routine voyage for a Yankee whaler, resulted in an unusual and interesting philatelic item to delight any stamp collector or student of postal history.

The item in question is the account book of the expenses of the whaling bark Globe, registered out of New Bedford and typical of the Civil War whaling fleet that roamed Pacific waters to insure a steady supply of whale oil during the critical years of the Great Rebellion.

Whaling ship records indicate the Globe was laid down at Duxbury, Massachusetts of 215 tons burden, became registered out of New Bedford in 1850, and commenced long and honorable service as a whaler on extended voyages in 1850, 1855, 1858, 1862, 1865, and 1869, completing her last voyage to the whaling grounds in May, 1872, when the new petroleum industry of Pennsylvania sounded the death knell of whale oil requirements in the United States.

Of the aforementioned voyages, the stamp collector has a definite interest in the voyages of 1862 and 1865, during which time Civil War tax measures were responsible for many interesting revenue stamps, as well as interesting extremes to collect revenue when revenue stamps were not available. This, then, is the philatelic voyage of the good ship Globe.

Upon return to New Bedford in August of 1864, Captain Tripp and his harpooners had accounted for 906 barrels of whale oil, which fetched the sum of $49,514.52 in Yankee dollars.

At this point came the traditional paying off of the crew and divison of profits after a successful voyage with resultant compliance with the Civil War tax laws.

The tax applicable to the paying off of the crew of the Globe was the receipt tax of 2c which said in part "... 2c to be paid on all receipts for payment of any sum of money or debt due exceeding $20 or for the delivery of any payment."

This revenue law had been in effect since the summer of 1862, and to provide for the proper collection of all taxes due, the Commissioner of Internal Revenue authorized the Philadelphia bank note company of Butler & Carpenter to produce the handsomely engraved first issue of United States revenue stamps, ranging in value from 1c to $200, which appeared in September, 1862.

The tax law further provided that only specific revenue stamps were to be used on specific documents such as contracts, mortgages, conveyances, probates, certificates, exhcanges and the like. This system proved unwieldly and lasted only until December 25, 1862, when the revenue stamps could be used without regard to original intended use.

This, then, was the situation in New Bedford in August 1864, when the crew of the Globe shuffled forward to be "paid off" in the presence of Captain Tripp and Charles Tucker, owners' agent. Of the original crew the account book indicates George Dorecon, ship's cooper, died at sea during the first two weeks of the long cruise, Harry Williams, able seaman deceased, John Burt and William White, seamen, deserted at St. Helena in March 1864 during the long voyage home, John Johnston, boat-steerer, put ashore to hospital after 469 days at sea, and John Grady, seaman, left the ship in 1863. The rest of the crew stepped up one by one to the account book, checked the deduction made against the ship's "slop chest" for clothing and tobacco purchased at sea, and then, bank draft or cash in hand, tumbled ashore with over two years' wages to spend in New Bedford town. Precisely at this point the ship's agent produced a sheet of two cents stamps to legalize the 2c tax receipt, and fortunately for the stamp collector of present day, the only 2c stamps available were a sheet of 2c "Black Jacks", issue of 1863 with the full face of Andrew Jackson, one of the most popular postage stamps ever issued by the United States!

As the muster was called, master, mate, harpooner, cook, steward, and seaman, all came forward and initialed "Black Jack" across the face with date and name, initials, or "X" ("his mark") indicating the Federal Treasury was 2c richer to help finance the guns for Gettysburg.

A closer look at the account book indicates what the whalers were paid after two years at sea risking life and limb against the elements and rampaging killer-whales. As was common in the whaling fleet, the paychecks at the voyage end were based on "lay shares" of the whale oil cargo, with the Captain entitled to the most "lay shares" and the "green hands" the least "lay shares."

Our Globe paybook witnessed by the staring "Black Jacks," row on row, shows the following pay for the crew after 812 days at sea:

In the instance of the "green hand's" pay of $251 for 812 days at sea, this averages out at 31c per day wages or a little more than 1c per hour for the back-breaking "character building" duties of a sailor abour a whaler during the Civil War era.

The Globe account book runs for three voyages and also includes the June 1865 to August 1868 voyages which netted $65,411 in whale oil and the final voyage from March 1869 to May 1872 which netted $38,909. For the 1862 voyage and thereafter, the "lay shares" divided among the crew represented 31% of the proceeds of the voyage, with the owners getting the final 69% out of which they paid all the vessel's expenses except the wages paid to the crew.

This interesting account book, interesting both to the stamp collector and the student of maritime history, includes 28 "Black Jacks" of 1863 used to pay receipt tax by crewmen and 21 "U.S. Internal Revenue" 2c orange, 4 "Bank Check" 2c orange, and 3 "Bank CHeck" 2c blue of First Issue Revenues used as receipts for the second and third voyages.

Thus ends the salty saga of "Black Jack and The Whales."

A remarkable piece, perfect for my illegal/improper usage collection. Sadly, subsequent to the publication of the above article in 1960, someone vandalized the logbook, cutting out 5 of the 28 Black Jacks and 2 of the 2c USIR revenue stamps. The remainder however, are still intact.

Shown below are selected pages from the logbook. Above the images is a link to a PDF of the entire logbook as well as all of the collateral items that accompanied it. Because the logbook was designed to be used in facing spreads, I stitched together left and right page images, so the center join will not be accurate, and there may be color/lighting differences between the pages.

There are additional blank spreads in the logbook subsequent to the last entry that I did not scan.

This is a LARGE file, approximately 132MB in size, the scans 200dpi. If the clarity is insufficent, I can provide a 400-dpi file upon request, but that version is almost 750MB. Original lossless TIFF images are several GB. 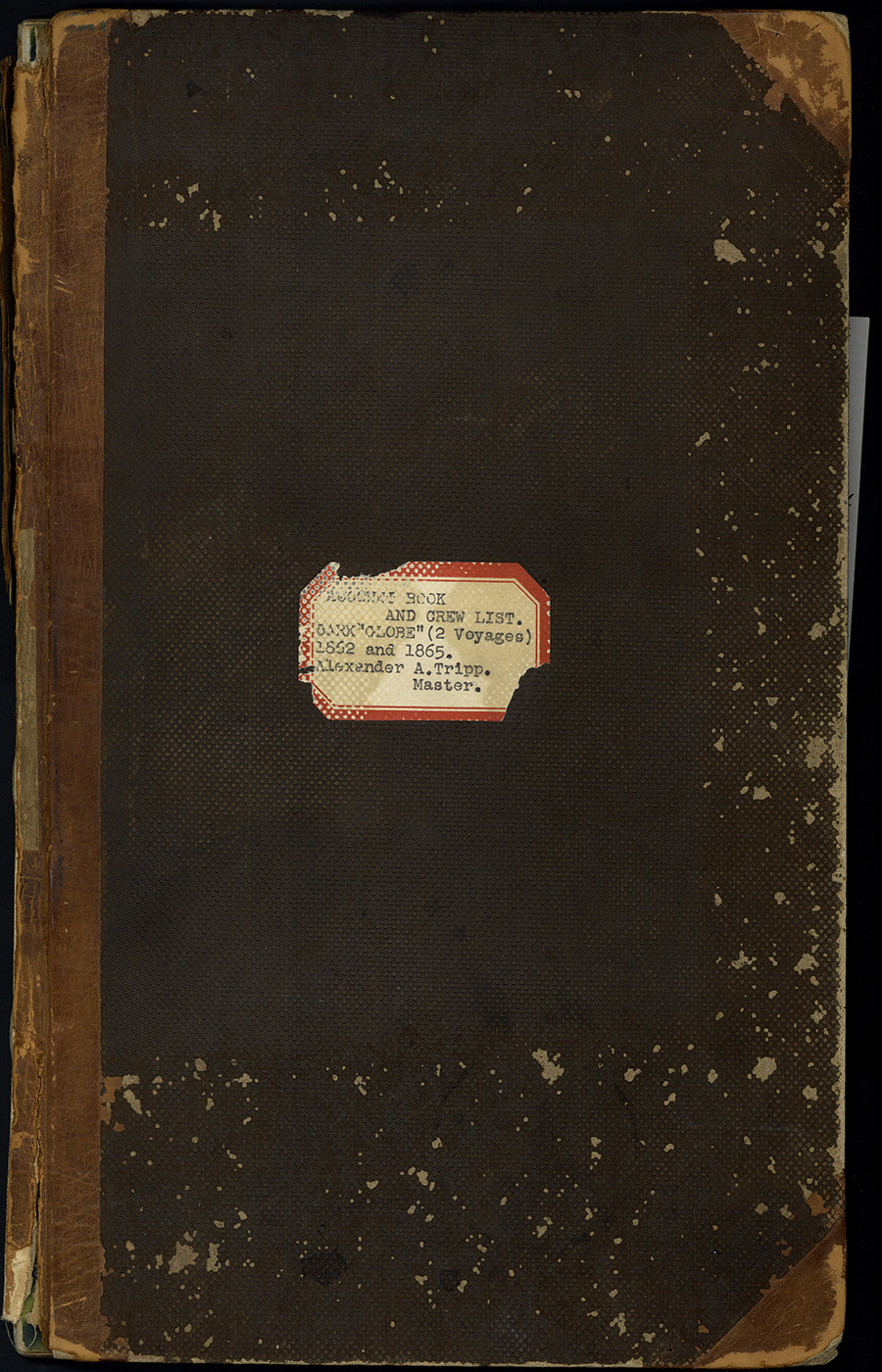 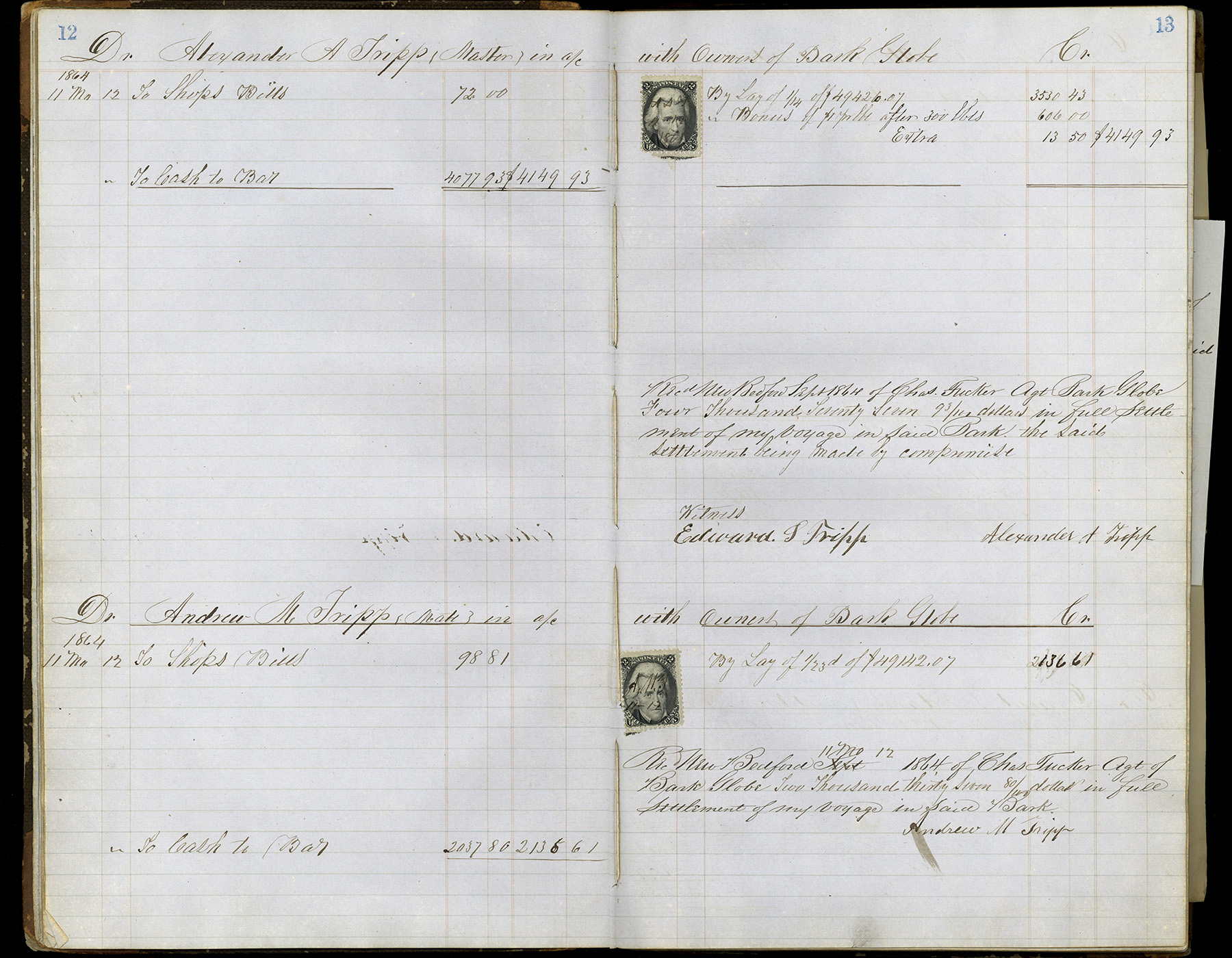 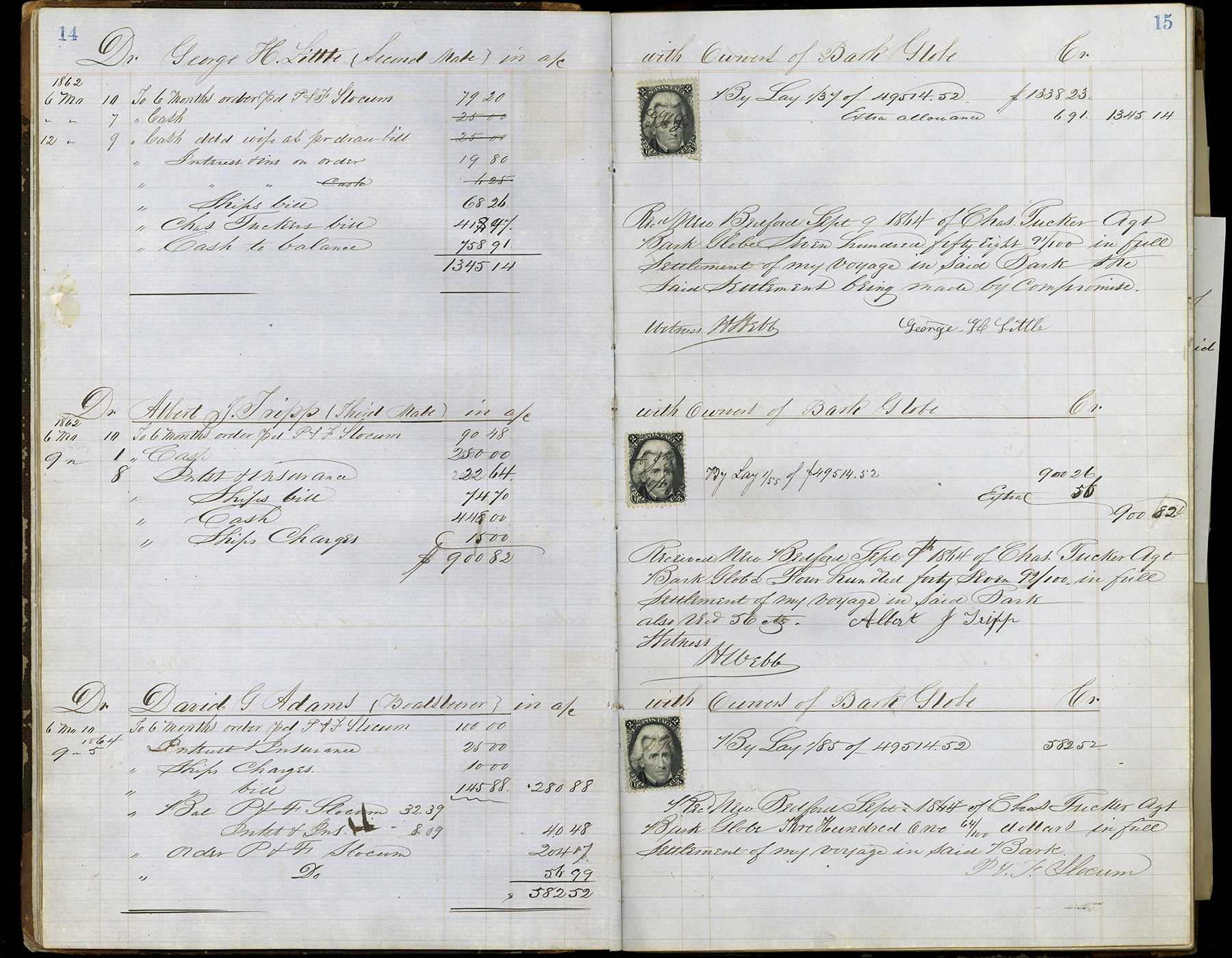 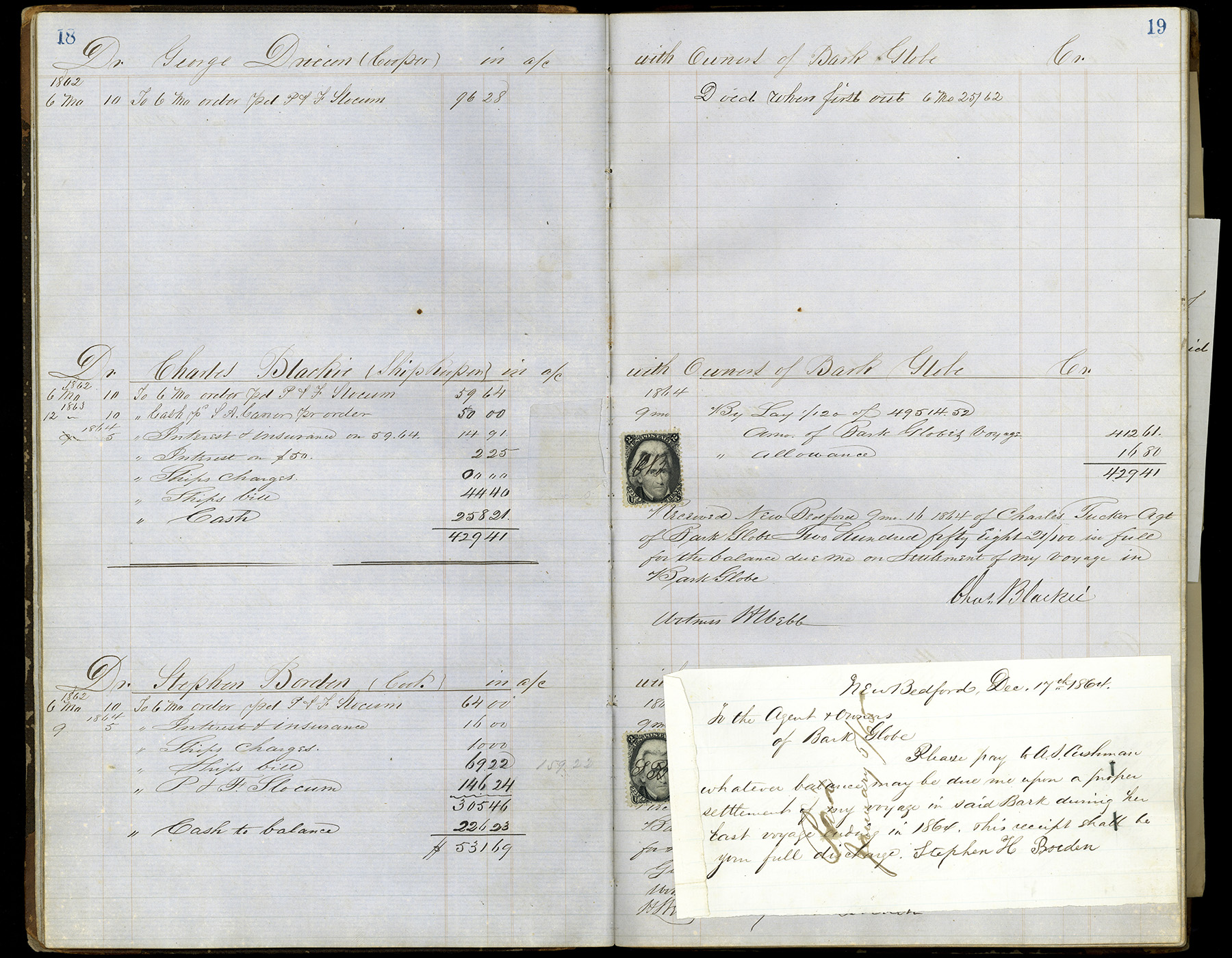 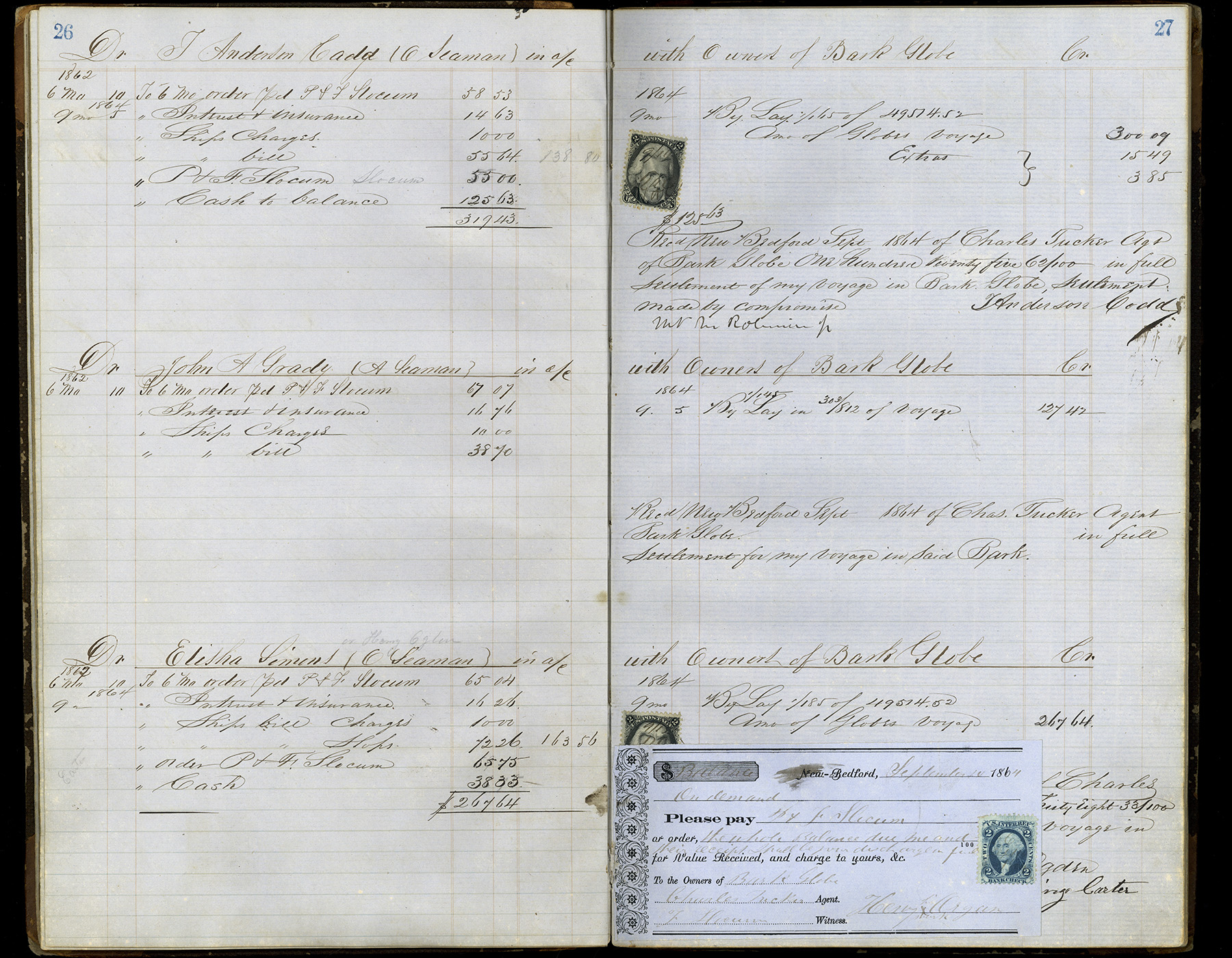 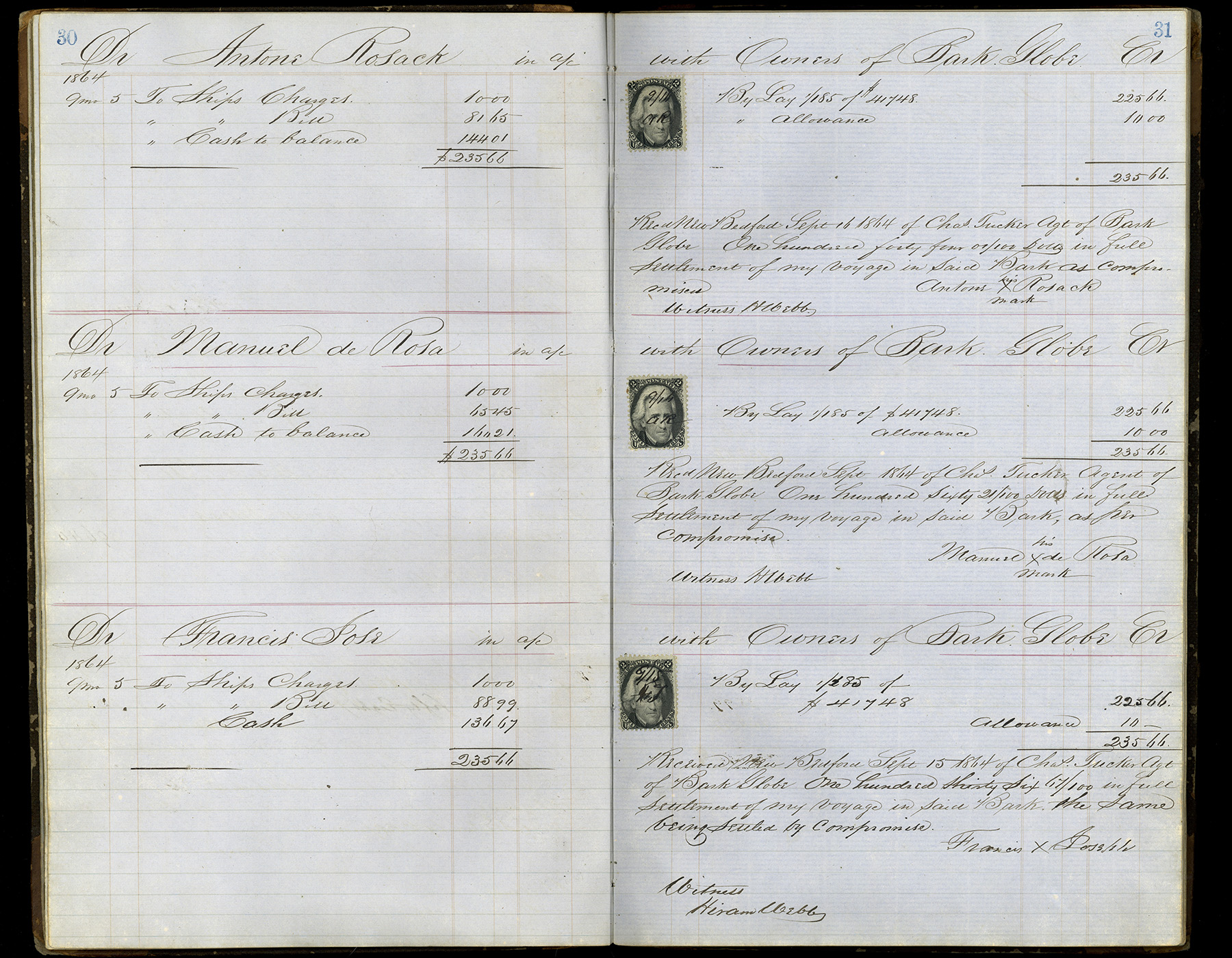 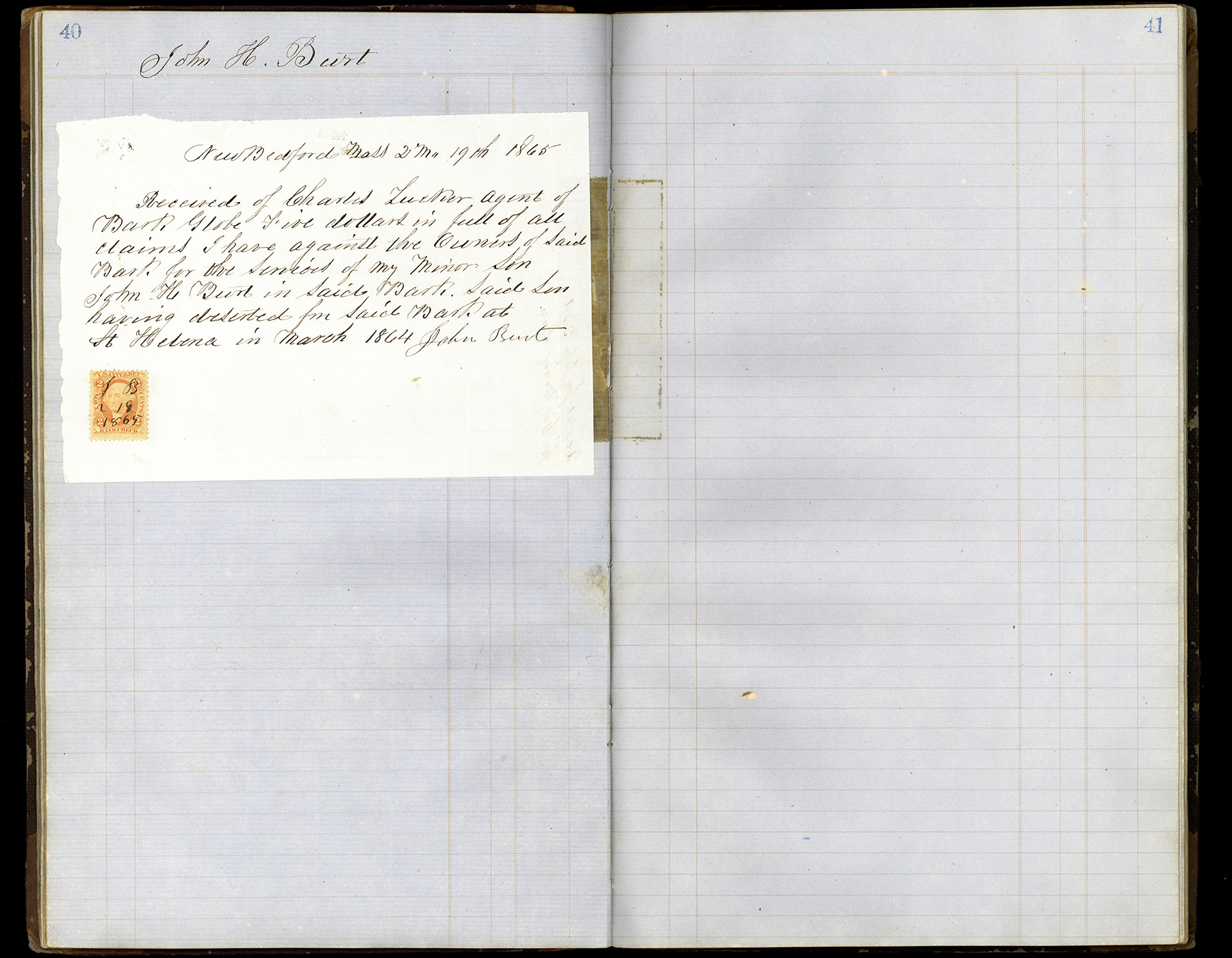 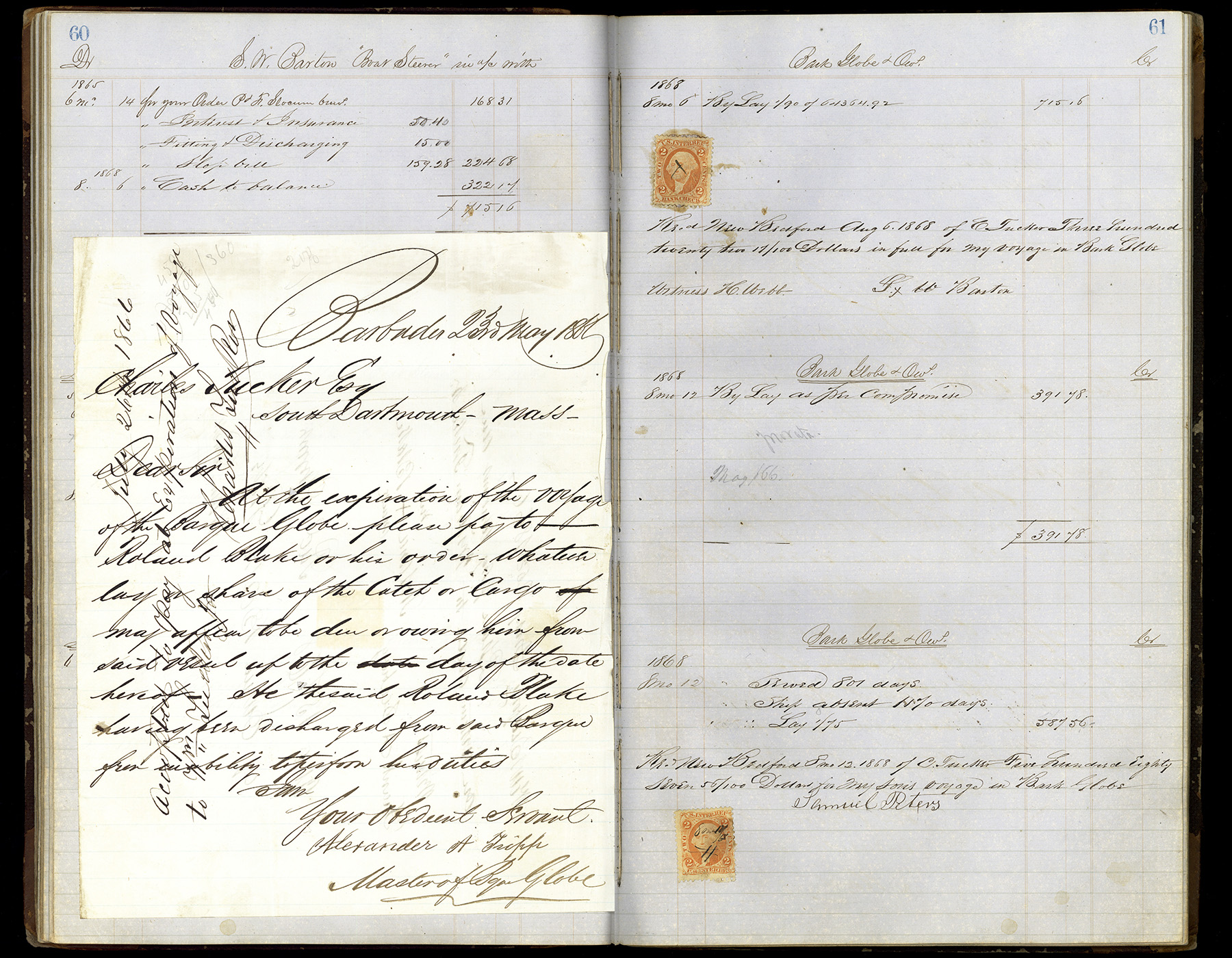 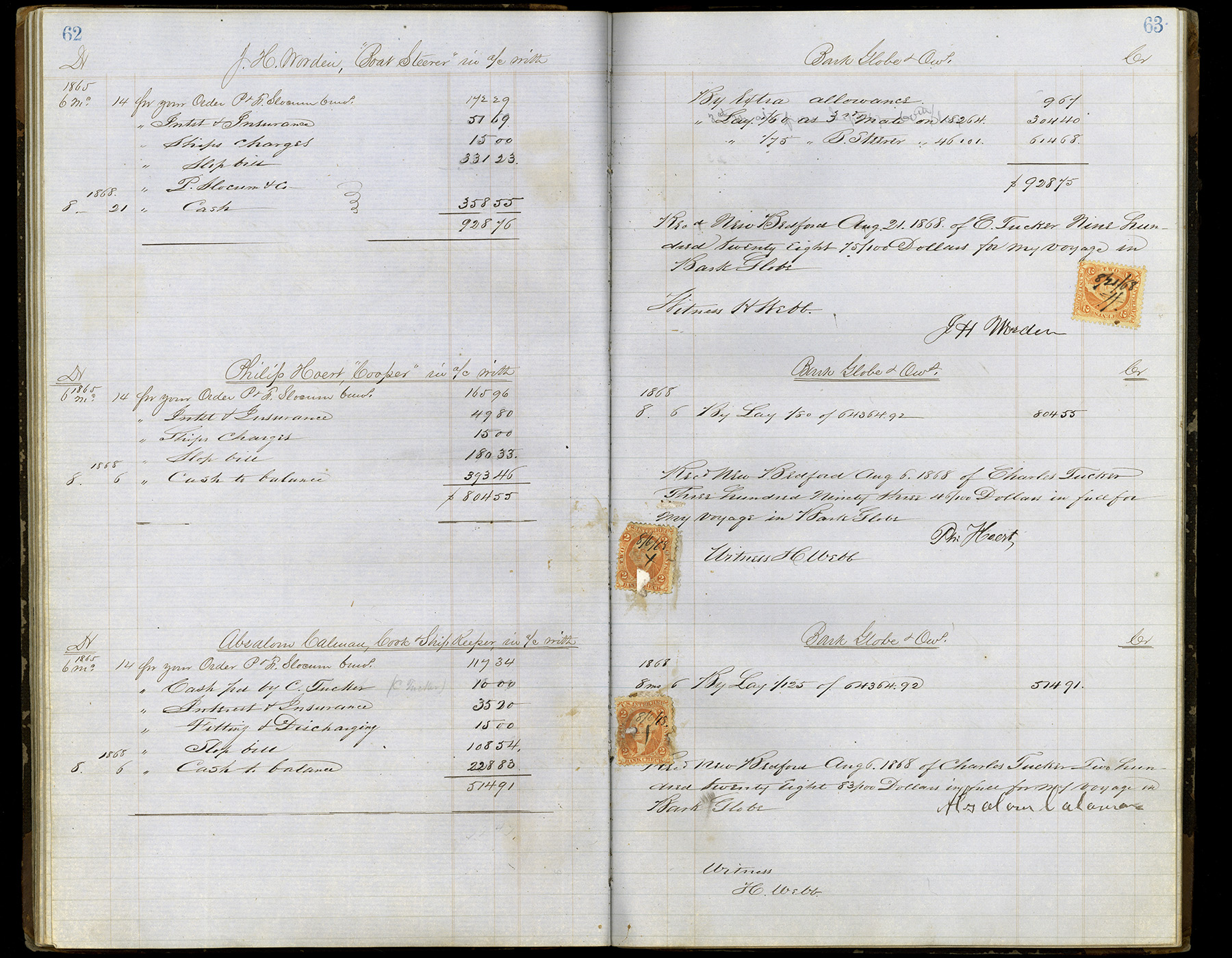 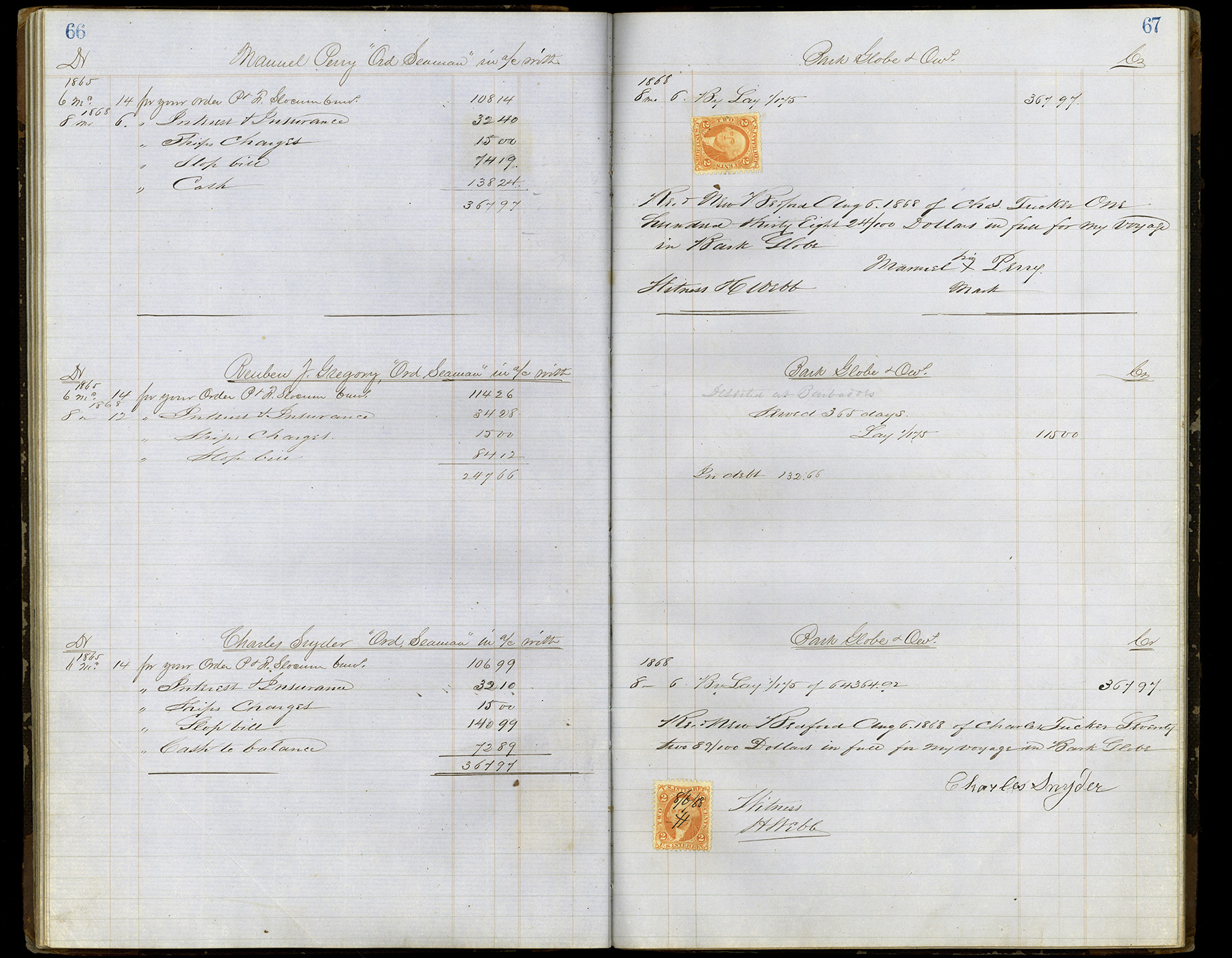 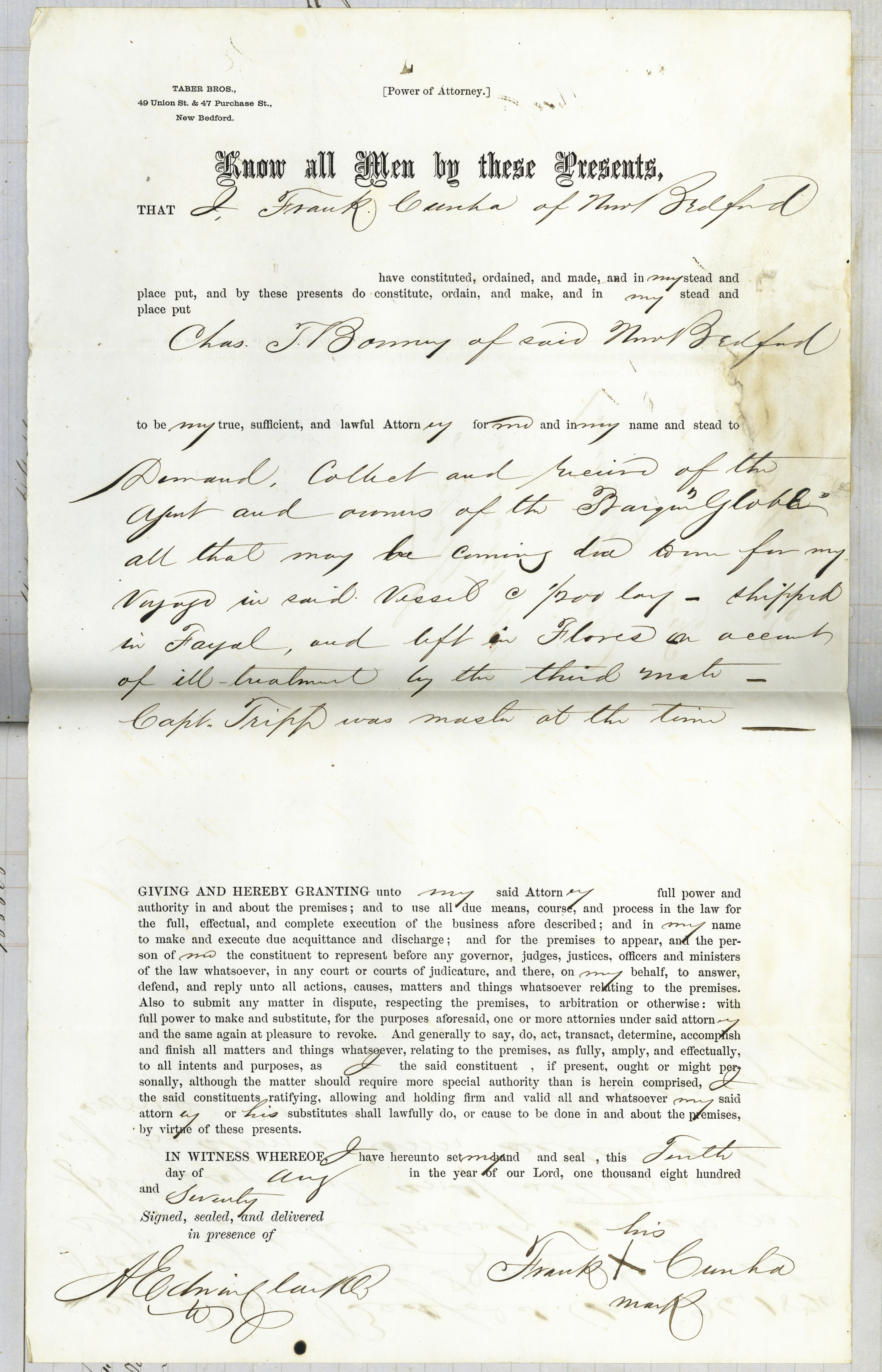 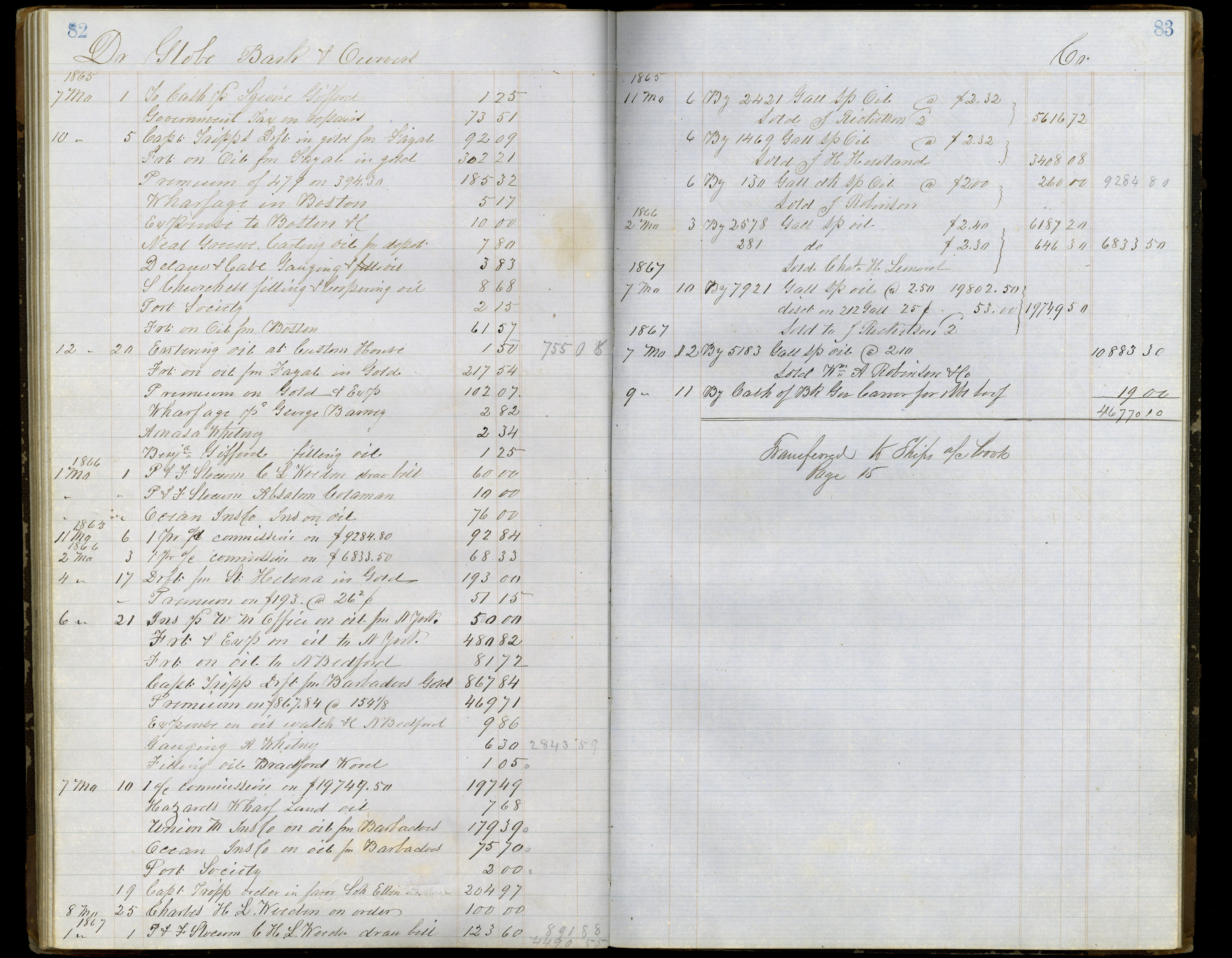 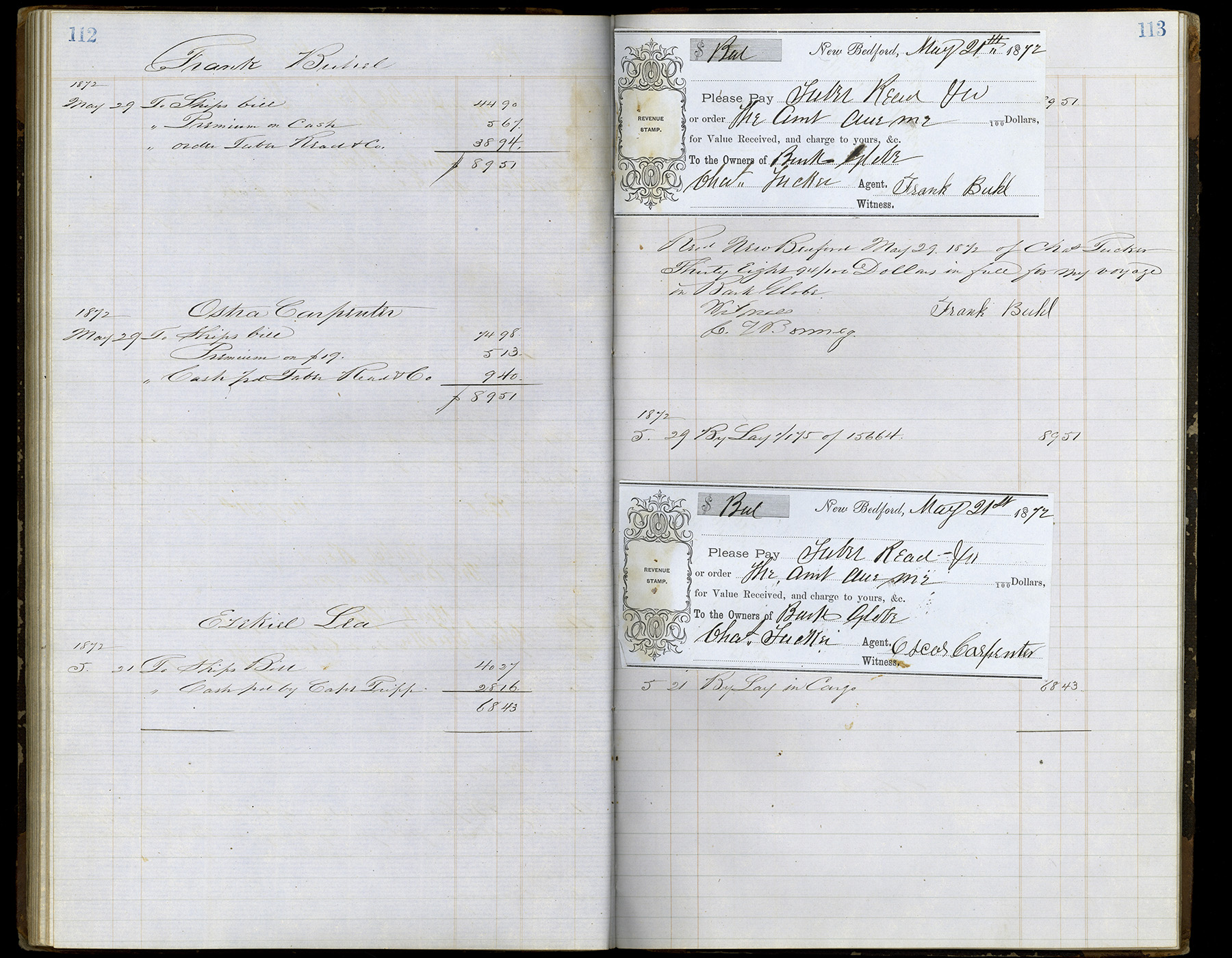